The World Diamond Council (WDC) held its 14th Annual General Meeting (AGM) in Mumbai, India on October 24 and 25, 2018, reaching consensus on critical areas of reform for both the Kimberley Process and the WDC System of Warranties (SoW).

Resolutions for further improvement of a responsible supply chain and enhanced self-regulation exercise within the WDC SoW Guidelines were passed. A Board- instructed strategic planning committee will develop a member’s toolkit to help in the implementation of the guidelines respecting the realities and practicalities of the diamond supply chain.  These guidelines will introduce the strongest level of adherence to date for SoW statement users, requiring adherence to universally accepted principles on human and labor rights, anti-corruption and anti-money laundering in support of mandatory Kimberley Process Certification Scheme (KPCS) implementation and including the inclusion of OECD due diligence guidelines. Changes will be implemented on an ongoing basis and will be included in the 2021-2025 WDC Strategic Plan. 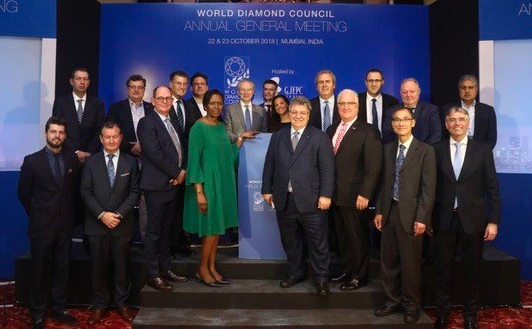 Stephane Fischler, president of the WDC, said, “This year’s session was important for many reasons, not the least of which is that our members truly embraced the spirit of collaboration and cooperation which accelerates our ability to drive important change within the industry and through our role as industry observers to the KP.  We are grateful to our hosts The Gem and Jewellery Export Promotion Council (GJEPC) for facilitating this year’s annual meeting and we look forward to the KP Plenary next month in Brussels where many of this year’s resolutions are expected to be confirmed.