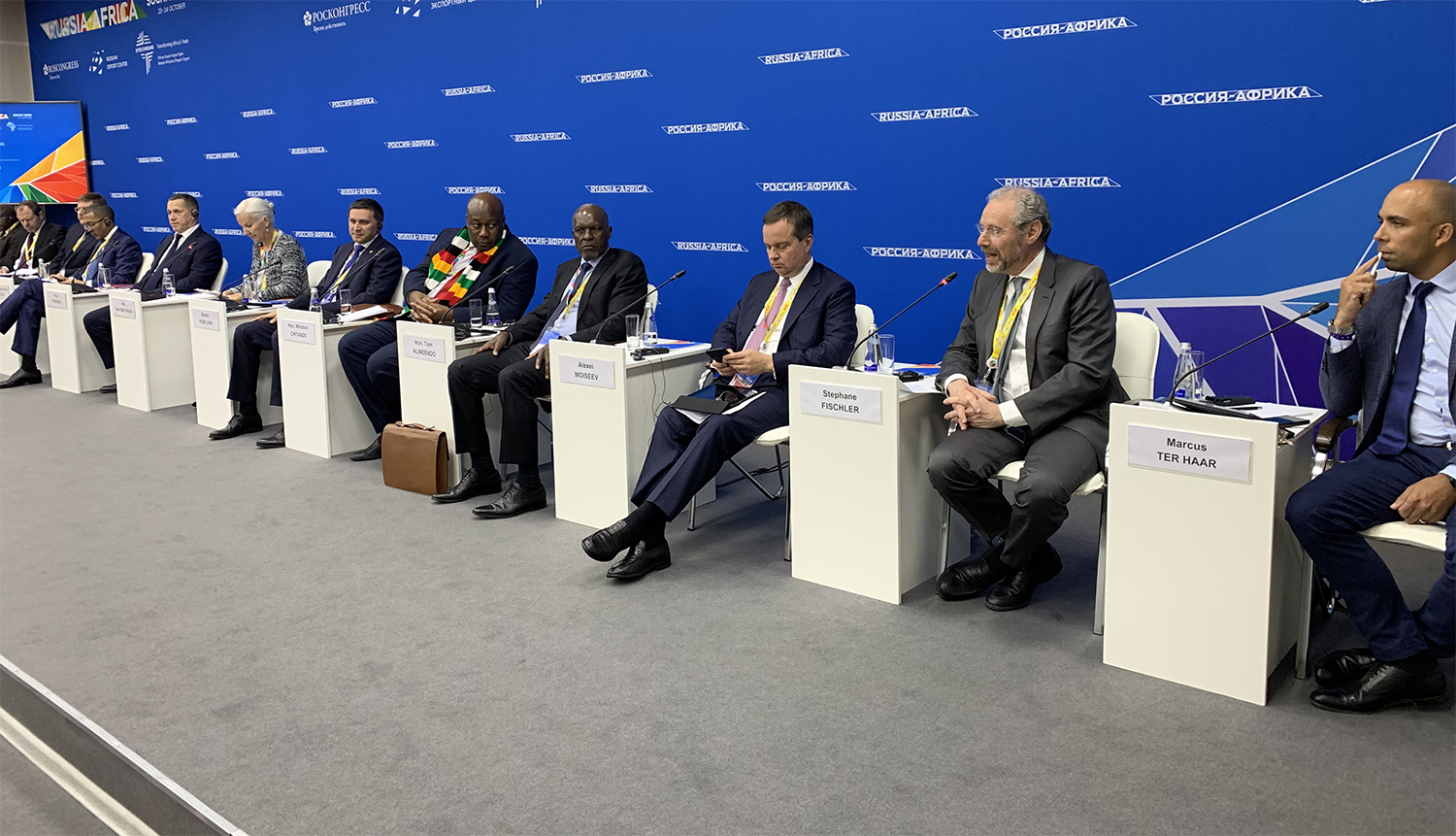 ABOVE: WDC President Stephane Fischler (second from right) addressing the Russia-Africa Summit in Sochi on October 23, 2019, during the session on “Russian-African Collaboration in the Diamond Industry.”

Diamond-producing countries on the African continent received about $8.1 billion, or 9.5 percent of the $85.9 billion worth of revenues generated by diamond jewelry in 2018, and some still may consider that an insufficient share, said World Diamond Council (WDC) President Stephane Fischler, speaking at the Russia-Africa Summit in Sochi, Russia, on October 23, 2019. But what is indisputable, he stressed, is the economic potential of the diamond resource, whose value increases by about a factor of five as it travels from the mine to the countertop of the retail jeweler.

“Diamond deposits hold the promise of a better future for all African producing countries, and more specifically for the communities living in the areas where they are located. To realize this promise, those mining the product need to receive fair value for their labor and capital investment, and an appropriate proportion of the revenues generated must be used to create sustainable economic and social opportunities at the grass-roots level,” Mr. Fischler said.

But, added the WDC President, for the long-term developmental potential of the product to be realized, the diamond must continue to be an aspirational purchase for consumers. “Because they can live without diamonds, they will only buy them if they want to,” Mr. Fischler said, noting that there are 10 million Africans whose income depends on continuing demand for diamond jewelry in consuming countries. “Reputation, therefore, is a key element, and defending that reputation is of paramount importance. If the integrity of the diamond is undermined, so is the economic potential of the product.”

Looking ahead to the 2019 Kimberley Process Plenary Meeting, which will be taking place in New Delhi, India, November 18-22, Mr. Fischler stressed the importance of progress being made in strengthening the scope of the Kimberley Process Certification Scheme (KPCS), as part the three-year review and reform cycle that will be ending in several weeks’ time. “More specifically, we are talking about amending the definition of ‘conflict diamonds’ so that it better enables us to provide an assurance that the trade in rough diamonds cannot fund the types of systemic violence being seen in certain diamond-mining areas today,” he said.

The WDC is currently in the process of rolling out its new System of Warranties (SoW), which Mr. Fischler noted “has a scope that goes significantly beyond that of the Kimberley Process.”

The new SoW statement, which members of industry are required to include on all invoices and memo documents, includes a commitment by the companies that they adhere to the WDC Guidelines. These now expressly reference international conventions relating to human and labor rights, anti-corruption and anti-money laundering (AML), the WDC President pointed out. Furthermore, a special task force, headed by Peter Karakchiev from ALROSA, is developing a toolkit that will assist industry members abide by the new protocol.

“Our goal is not to go it alone,”  said Mr Fischler, who publicly called upon Mr. Alweendo, the Namibian Mining and Energy Minister, in his dual role as Chair of the African Diamond Producers’ Association (ADPA), to formalize and strengthen the relationship between the African producers and the WDC. “In the 19 years since its establishment, the KP has proven to be a remarkably effective mechanism, and a forum in which all participants and stakeholders in the diamond value chain can be equally heard,irrespective of their size. This dialog is absolutely essential, for the KP’s role is not to be a sanctions-imposing body, but rather the operator of a system that prevents violence and supports conflict resolution. In so doing, it will facilitate capacity-building in the mining areas, while maintaining and growing consumer confidence in diamonds.”

“By being able to tell a compelling story about the economic and social benefits provided by diamonds in the countries where they are sourced, the value of the jewelry product will be enhanced,” he said. “Not only should we be protecting the integrity of our product, but we also should be releasing its full economic potential and differentiating it from other products that have no measurable social value or impact.”