2019 KP PLENARY MEETING REPORTS PROGRESS IN A RANGE OF AREAS

ABOVE: The 2019 KP Plenary Meeting in session in New Delhi, India.

While most media coverage of the 2019 Kimberley Process (KP) Plenary Meeting focused on the discussion around the “conflict diamonds” definition, it was only one of a great many subjects tackled during the five-day gathering in New Delhi, India, from November 18 to 22. Some were related to the KP’s three-year review and reform cycle, which ended at this year’s Plenary Meeting, and others to topics such as the increased efforts being taken to improve the implementation of the Kimberley Process Certification Scheme (KPCS) in artisanal mining countries.

Over the first four days, members of the sub-teams of which the Ad Hoc Committee on Review and Reform (AHCRR) was comprised gathered together with the goal of chalking up as much progress as possible before their mandates expired.

Among the review and reform sub-teams registering substantial progress was the one headed by WDC Board Member Peter Karakchiev, which was charged with the establishment of a Permanent Secretariat for the KP. Once created, the new body will replace the Administrative Support Mechanism (ASM), which is hosted by the WDC. 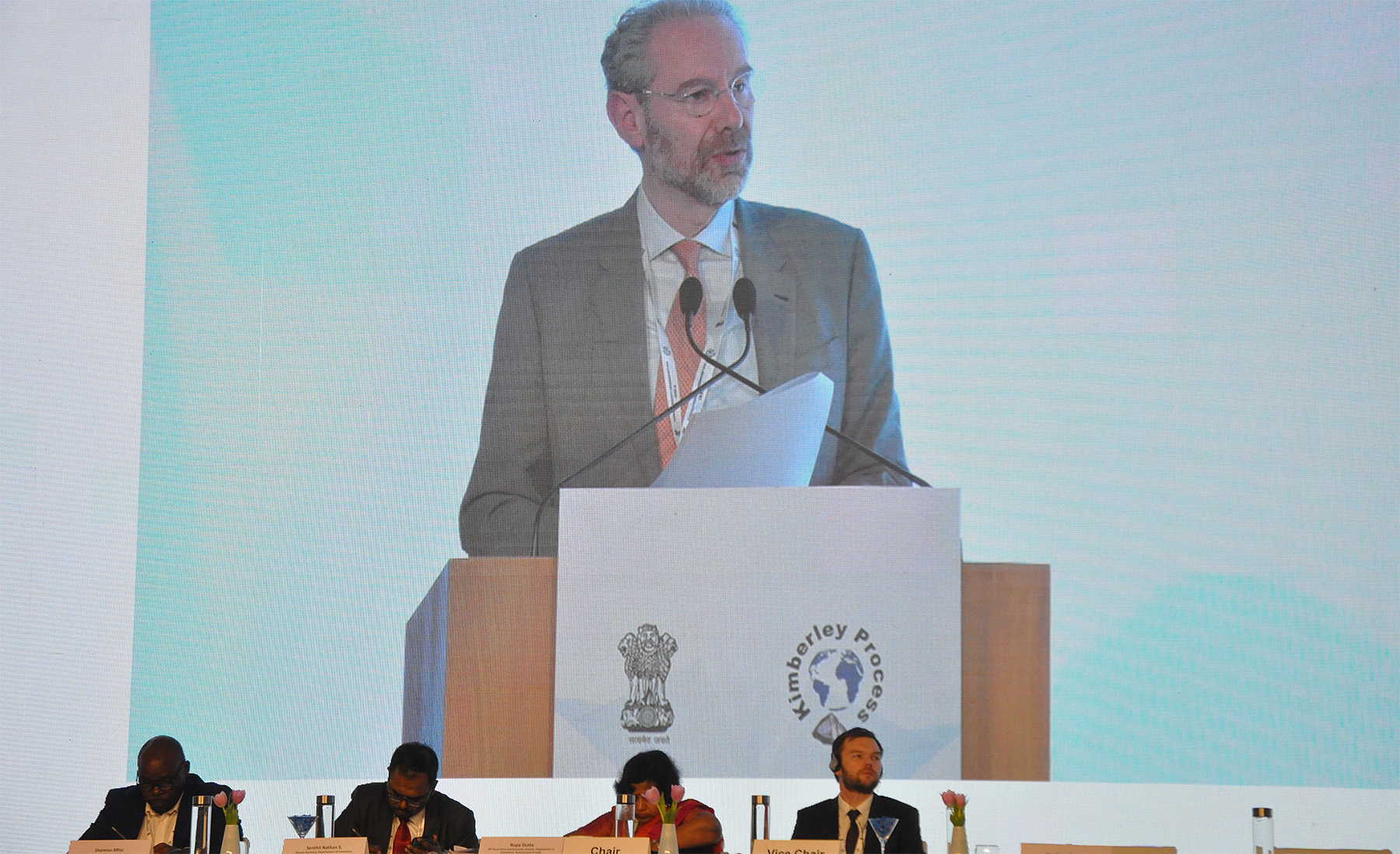 The podium of the closing session KP Plenary Meeting in New Delhi, during the speech by WDC President Stephane Fischler.

The task now is to find a home for the Permanent Secretariat, and expressions of interest have been received from Austria, Botswana, the People’s Republic of China, the Russian Federation and the United States of America.

To identify the host country and define how the Permanent Secretariat will operate, the KP Plenary agreed to create a tripartite Technical Expert Team under the Working Group of Diamond Experts (WGDE). It will make recommendations, but the final decision still rests with the KP Plenary.

In the meantime, the Plenary extended the mandate of the ASM for an additional two years, or until the date of setting up of a Permanent Secretariat, whichever comes earlier.

In its final communique, the Plenary described as “significant” the work done by the AHCRR sub-team on a Multi-Donor Fund, which has been proposed as a means of funding those participants with limited financial resources.

A team of experts funded by the European Union presented the results of a needs assessment for a voluntary Multi-Donor Fund. It said that four priorities had been identified. These are capacity building in the KP, technical assistance, the participation of civil society and participation of least developed countries.

The fourth AHCRR sub-team looked at the strengthening of the KP’s Plenary Peer Review Mechanism. Its finding resulted in an Administrative Decision, which aims to improve the provisions of peer review, including annual reporting, review visits and review missions.

During the KP Plenary, the Working Group on Monitoring decided to adopt provisional changes to the operational framework for exports of rough diamonds from the Central African Republic (CAR) and the terms of reference of the dedicated Monitoring Team. 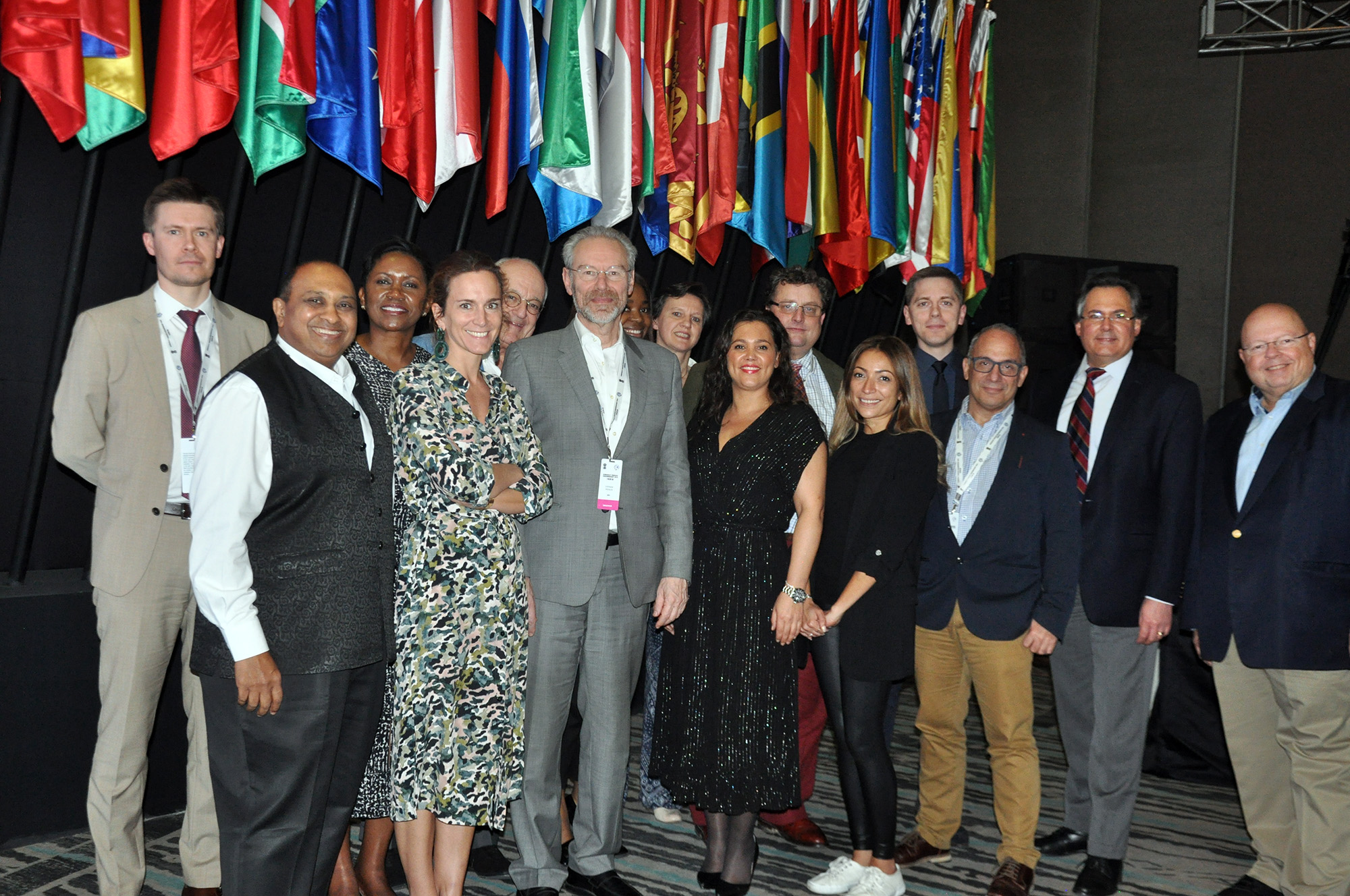 The WDC team that attended the KP Plenary Meeting in India in November 2019.

For the period of one year, it was decided to change the system by which all CAR KP-certified goods need to be verified by the monitoring team before being exported, to one in which exports will be verified after they have left the country. In this way it is hoped that legal exports will increase. The new system will be reviewed during the year to assess its efficacy.

Among the highlights of the Plenary Meeting were a series of presentations about regional community development programs being launched in Central Africa, covering Angola, the DRC, CAR, Cameroon and the Republic of Congo and Gabon, and the West African Mano River region, including Côte d’Ivoire, Guinea, Liberia and Sierra Leone. Funded by various parties including the EU and USAID, they are specifically aimed at strengthening KP compliance in artisanal and other alluvial mining areas.

As is usually the case at the KP Plenary Meetings, the expansion of the certification scheme was discussed, with new applications of membership being received from the Kyrgyz Republic in Central Asia and Qatar in the Arabian Gulf.

Admitted as a newly independent member in the KP was United Kingdom of Great Britain and Northern Ireland, but its participation will only take effect from the date on which European Union law ceases to apply in the UK.

Without the UK, the total number of participants in the Kimberley Process is currently 55, representing 82 countries. These include the 28 EU member states, which participate as a single participant represented by the European Commission.