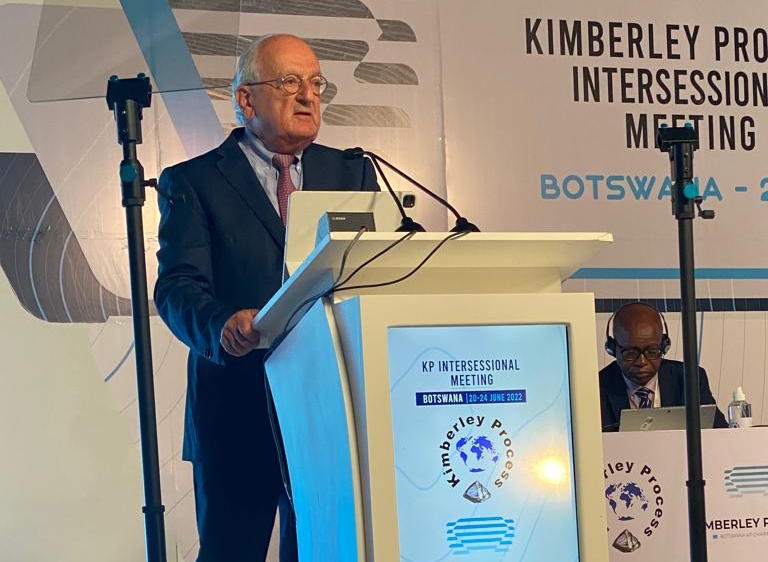 Speaking on June 24, 2022, during the closing session of the 2022 Kimberley Process Intersessional in the town of Kasane, Botswana, WDC President Edward Asscher noted a positive shift in the readiness of members to reforming the KP.

“This year, throughout our engagements with many government participants here in Kasane, there seems to be strong support for further reforms, including that of the ‘conflict diamond’ definition,” he told the Intersessional meeting, which took place between June 20 and June 24, 2022.

It is important that such a process not only occur on the sidelines of the KP, but within its formal framework, Mr. Asscher stressed.  The WDC has thus requested that the KP Chair add the Reform and Review Cycle to the draft agenda of the KP Plenary scheduled for November, so that discussions and work can begin in 2023 under the incoming KP Chair, Zimbabwe.

Referring again to Zimbabwe, Mr. Asscher said that WDC was heartened by positive progress reports about the situation in the country, emanating from participants in the recently completed review visit. They were confirmed in discussions with civil rights experts working in the field. “This provides a positive backdrop as Zimbabwe prepares to assume the KP Chair in 2023,” the WDC President said.

Noting that he had begun the week of meetings with mixed feeling about the prospects for progress, the WDC President said he will be heading home from Botswana with a more optimistic feeling. “I feel more confident about the cohesiveness of the Kimberley Process,” he stated. “The glue that holds us together is not reliant on there being one-mindedness on each critical issue – it never has been – but rather on the common belief that natural diamonds should be an equitable resource for growth, development and hope, and bring better lives and wellbeing for all people involved.”

The ability of the KP to overcome differences during the week and conduct constructive discussions were possible because of the influence of the KP Chair and the host country, Botswana, the WDC President noted. “We have witnessed their humanity and wisdom,” he remarked.

Mr. Asscher concluded his speech by paying tribute to Elke Ceulemans, who for the past several years has been the focal point for the Administrative Support Mechanism (ASM), which the WDC operates to provide assistance to the KP Chair and its working groups, and who will be leaving the position later this year. “She has been an invaluable support to this organization,” he said.

Download a full transcript of the WDC President’s address