LOOKING BACK AT A ‘CHALLENGING’ TIME,
AND FORWARD TO BETTER DAYS 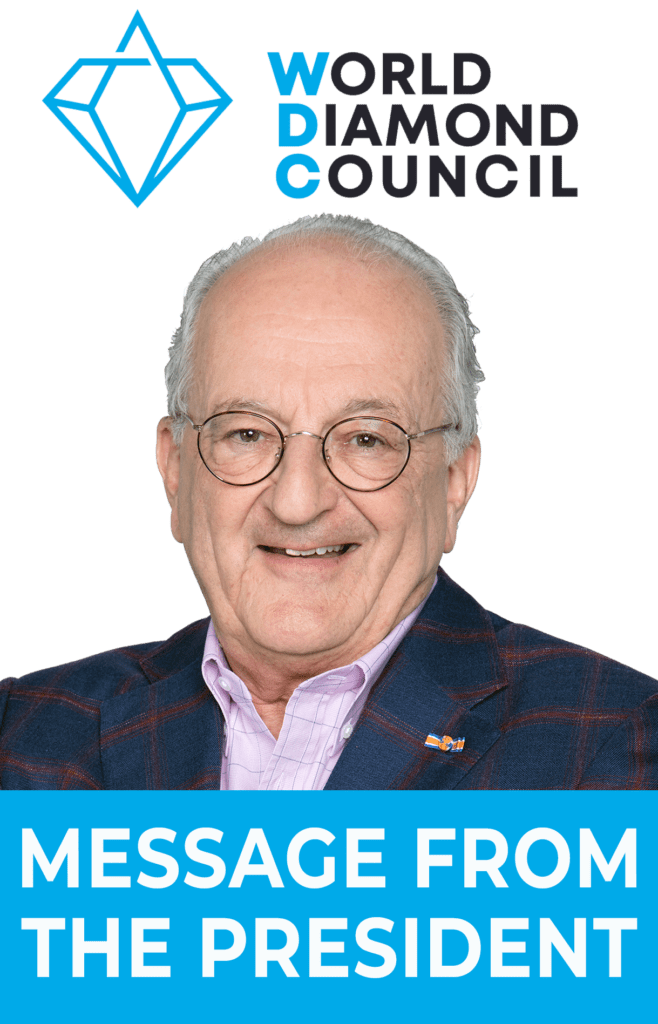 When one takes a responsible position in the leadership of an organization, one should usually be prepared for dynamic change. The past year exceeded any expectations, and in a negative way. The people of Ukraine were caught up in the fighting and violence and have tragically borne the brunt of a tragic war. The natural diamond supply chain was disrupted and the political and the economic fallout has been considerable.

As a result of the war, energy prices exploded in Europe and elsewhere. Inflation reached levels we could not have dreamed of a year earlier, and the mood of consumers changed. We referred to the situation with deliberate understatement, as “a challenging year.

In May 2023 I shall come at the end of my second term as WDC President. In that context, I will look back not only at 2022, and but also at my most recent term in office and my first term.

Back in 2014, being the first person to be elected President of the WDC by its duly elected Board of Directors, I and all my colleagues began talking about transparency, auditing and orderly and accountable governance.

Then, when I gave speeches about the WDC, I referred to the direction we had to take the industry. Our message was that there is a changed world out there, and we must evolve. The industry needed to adapt to new demands from governments, and above all from consumers. The younger generation was insisting that we provide more than high-minded statements, but also verifiable proof that diamonds were responsibly sourced in the producing countries.

And so, the dominant message of WDC changed from “the KP is defending the integrity of our supply chain” to “the KP is the foundation upon which the industry is building new systems to ensure a responsible supply chain.”

At the same time, we took upon ourselves the role within the KP to convince governments that it is consumer confidence that underpins a diamond’s ability to be a valuable proposition for producing countries. That does not mean that we were telling African producing countries what to do. Such an attitude would never be acceptable. But we felt we had an obligation to discuss what we all need to do in order to protect consumer confidence.

Lab-grown diamonds posed another challenge, and here I refer specifically to what transpired from a business perspective, as the new product category established its niche in the jewelry market.

As manufacturers of lab-grown stones overproduced, and consequently saw their prices sink drastically, retailers were provided the opportunity to improve their margins. It cemented the status of the category as a lucrative product line.

I mention this mainly because it elevated the need to set the natural diamond industry apart, and that means we have to emphasize three fundamental characteristics that are exclusive to the product we sell. These are natural diamonds’ inherent rarity, because they are extracted from finite resources; their enduring value; and their ability to provide sustainable economic and social opportunity to the citizens of countries where they are mined, recovered and processed. And all this is entirely dependent upon the natural diamond maintaining consumer confidence. It is a market reality for which we need to engage with the producing countries in the KP.

The WDC can be seen maneuvering between various requirements – how to show leadership in the industry on the one side, and how to influence governments on the other. But there is also a third – how to remain neutral if we want to represent the whole industry.

Remaining neutral on the political side in 2022 was complicated. Consumers were demanding guarantees that the diamonds they buy were not contributing to the war in Ukraine, while diamond and jewelry producing centers needed to defend their workers and dependents.

Our neutrality led to criticism by outsiders and civil society, and from some on the inside as well. Balancing the various interests of an international organization is always complicated, and especially at times like this, where many actors in our supply chain feel strongly about what they are witnessing on the news each day. It was and is the elephant in the room, especially when going to conferences and events where we are asked to speak about the supply chain during these times of war. We have had to set our personal opinions aside, in order to preserve the WDC as a representative organization.

Such dilemmas are not behind us, as I write these words. We will take these issues into the new year, which once again undoubtedly will be “challenging.” But the resilience, creativity and integrity of our industry will make certain that we overcome what confronts us.

Let me finish by saying that leadership in our industry is not a personal success. It is result of teamwork. I am grateful for being part of that team with Feriel, Ronnie, Elodie, Udi and many others in the WDC.

I wish for you all a peaceful and fulfilling Holiday Season, and happy, healthy, safe and productive New Year.

Message from the WDC President: Promise and hope beckon, even in the shadow of a difficult year

Message from the WDC President: Taking stock before the 2021 Kimberley Process Intersessional

Message from the WDC President: A year to forget, or one to learn from