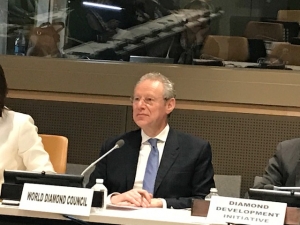 Stephane Fischler, Acting President of the World Diamond Council (WDC), has addressed a side event, held in New York as part of this year’s session fo the Un General Assembly. Comprising a panel discussion, it was entitled “The Kimberley Process, sustaining peace and achieving the 2030 Agenda for Sustainable Development: the diamond industry as a model for transforming lives.”

Representing the WDC along with Mr. Fischler were Marie-Chantal Kaninda, Executive Dirrector, and WDC board members Gaetano Cavalieri, President of the CIBJO, the World Jewellery Confederation; Ronnie Vanderlinden, President of the U.S. Jewelry Council; Dave Bonaparte, CEO of Jewelers of America; David Bouffard, Vice President of Corporate Affairs of  Signet Jewelers, and Tiffany Stevens, President an CEO of the Jewelers Vigilance Committee.

The following is the text of Mr. Fischler’s address:

The first ever mineral-based global mechanism to contribute to settling armed conflicts, the KP has over its relatively young life significantly contributed to peace and security, and so, enabling the diamond industry to support and create employment, income and livelihoods for millions of people.

A vast number of diamond industry companies and their principals have shown for decades that “diamonds” do transform lives. From the prime examples of Botswana and Yakutia in the Russian Federation, to even the smallest companies in India, Belgium, Israel, the US and many others.

The impact has been impressive for some countries and most important to their indigent communities. Some have shown that the responsible management of minerals is material to socio economic development. Others have unfortunately failed and too often done so with dire consequences.

The risk of conflict fueled by a mix of lack of capacity, transparency, toxic politics, corruption, greed, outside intervention and the presence of precious minerals such as diamonds, gold, coltan and others is ongoing.

But it need not to be that way.

As the voice of industry in the KP, the WDC believes that in this important year of KP Review, there are three areas in urgent need of reform:

Expanding the meaning and scope of conflict diamonds to increase the likelihood of safe and secure working conditions, fair labor practices and sustainable development in diamond communities.

Adding a permanent secretariat in a neutral country, a crucial role for strengthening the long-term implementation of the Kimberly Process Certification Scheme by improving the implementation of KP agreed decisions, more effectively restoring KPCS implementation in sanctioned countries and better supporting development projects in Participant countries.

These changes will be critical in the path to peace and long term change in the lives of millions who are today denied their basic rights to a secure and decent livelihood.

To do so, there must be recognition and governance by those entrusted by the people for the people. Through proper governance and the ethical conduct managing and delivering and maintaining, at a bare minimum basic services and infrastructure comes trust.

When trust is earned, people feel respected and empowered and the feeling of nation building is secured.

Those who achieved this trust now have the right tools to long term and sustainable development: confidence and care.

Duty of care, from top to bottom, between the minister of mines to the actual miner and all participants along the chain.

The diamond industry in all its facets, from mine to finger, is represented in the KP by the World Diamond Council and we understand our duties and responsibilities.

But the WDC is too often confused with a development agency, conflict prevention specialists, or even government agents. We are none of those things. We cannot accept to be laden with the failures of those whose responsibilities these are.

And yet we never disengaged from the KP nor from the challenges of artisanal diamond mining. We continue to push for change from the inside, even though we must do so indirectly, as observers, in an environment of complicated processes involving many actors and an incredible amount of mitigating factors. Being here at the UN you all understand better than anyone the challenges encountered and our mixed feelings of hope and commitment, but also frustration.

Fortunately, the vast majority of diamond mining countries have delivered well documented and lasting change for millions of men, women, and children.

A minority has so far failed to deliver on the enormous potential for good that defines diamonds, while the others stay focused on adding and sharing value.

But there is hope to drive change, and we are encouraged by the KP decision, achieved by consensus under the Australian chairmanship led by Robert Owen- Jones assisted by Nick Williams to secure a 2-year review and reform process which will start under the EU chairmanship and followed by the Indian chairmanship. We thank Angola for having accepted to co-chair this important responsibility. But we need leaders on the ground to make it happen.

The WDC would like again to thank The PR China, the EU, India, Russia and the US who have given their strong support to the Chair and our African partners to engage in this review and reform process. It must now deliver.

To the Civil Society Coalition, thank you for our recent meeting and the very open and fair exchange of ideas. Now led and overwhelmingly represented by

African-based NGOs, it has shared with us its focus and mission on securing lasting changes to benefit the artisanal diamond communities.

Making sure those most at risk and affected become full participants in the value chain. A goal around which the industry and its partners are fully aligned on.

The Kimberley Process definition of conflict diamonds has provided the necessary focus to drive important change. But it is an unfortunate truth that the nature of what constitutes conflict has evolved. We want to reiterate that we, unequivocally support change and believe it is necessary to achieve the goals describe above. We acknowledge that this will be a difficult and challenging task ahead. Creating a new definition that would secure preventive actions on the ground.

But it only takes a few good women and men securing the trust of their people to drive change. We are fortunate to have some of them with us.

Let us make sure the reform process will change the few of the past into the many of the future and help these countries secure their rightful place and achieve the best value from their mineral resource wealth among the Botswana’s, Namibia’s, South-Africa’s, Russia’s, Canada’s, Australia’s of the diamond mining industry.

Thank you again for the opportunity to represent a very proud industry as we continue to fight for the needed reform efforts within the Kimberley Process.