WDC expresses concern about pace of reform during 2018 KP Plenary,
still hopeful scope of Kimberley Process will be expanded during coming year 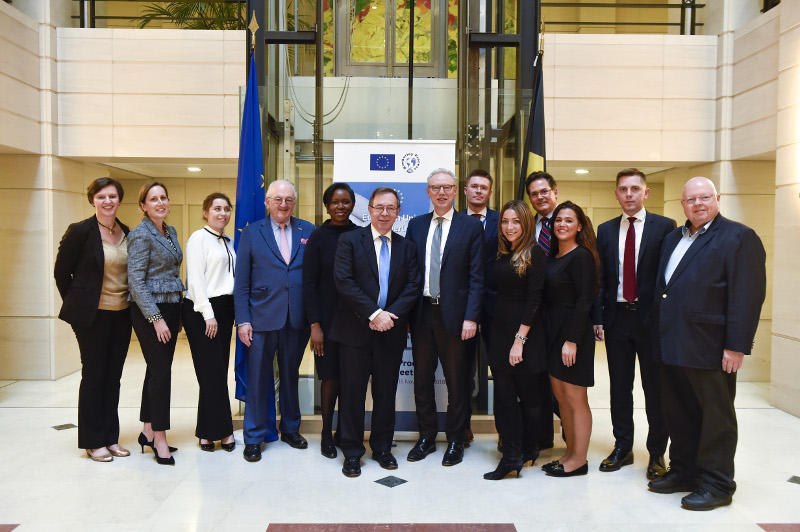 ABOVE: Members of the WDC delegation at the 2019 Kimberley Process Plenary Meeting in Bussels, Belgium.

While reiterating its support for the Kimberley Process Certification Scheme (KPCS) as the most effective means possible to end the trade in conflict diamonds, the World Diamond Council (WDC) expressed concern that more progress was not made in reforming its scope during the 2018 KP Plenary Meeting that ended on Friday, November 16 hosted by the European Union in Brussels, Belgium.

Nonetheless, the WDC considered as positive the noting in the KP Plenary’s final communique of the submission by the Canadian government of an expanded definition of conflict diamonds, which had been proposed by WDC and its fellow KP observer, the Civil Society Coalition (CSC), and expressed hope that the Kimberley Process Participants will support the amendment and make further contributions ahead of the next KP Plenary in India in 2019. Furthermore, the WDC welcomed the decision of the KP Plenary to adopt all three Administrative decisions that were proposed by the industry. These included the ‘Establishment of a Kimberley Process Secretariat’, ‘Compilation of Modifications to Technical Definitions’ and ‘Use of Unified Diamond Nomenclature and Terminology as a Best Practice’. This result clearly showed the commitment of the industry to promote change and institutional effectiveness of the KP.

“We recognize the success of the Kimberley Process Certification Scheme (KPCS) in addressing the issues raised within its mandate, as it relates to the original definition of conflict diamonds,” said World Diamond Council President Stephane Fischler. “As the achievements of the past demonstrate conclusively, the KPCS not only has the capacity to protect people in the mining areas, but also to provide them with opportunities that otherwise might not exist. This is particularly relevant when it comes to artisanal and small-scale miners, who account for 5-10 percent of rough diamond production by value. They are an important part of the up to 10 million workers that the diamond industry sustains globally and are particularly vulnerable from both the social and economic perspective. The KP should be playing a primary role in protecting their interests and enabling them to obtain legitimate access to the world markets.”

Mr. Fischler continued, “We remain hopeful that the KP can achieve tangible progress in its commitment towards reform in the future and we urge KP Participants to support efforts in constructive progress in this regard to achieve incremental change. The value of a diamond is enhanced by the positive values that communicates to the consumer, and we therefore believe that any effort to reinforce those values is worthy of discussion.”

The WDC is hopeful that a reformed KPCS will support and complement its strengthened System of Warranties, which were ratified at the Council’s Annual General Meeting in Mumbai last month. These recognize the importance of maintaining and building on international standards and initiatives that provide consumers with the assurances they seek around human rights.

The WDC’s System of Warranties is a critical component in the suite of standards and practices that are working to protect the integrity of diamonds, the diamond industry and populations in the diamond-mining areas, among them the OECD due diligence guidance, the UN Guiding Principles on Business and Human Rights, and the Responsible Jewellery Council’s Code of Practices.

Mr. Fischler praised the critical role played by Hilde Hardeman, the outgoing Chair of the Kimberley Process, and her team at the European Union, noting their positive leadership and tremendous effort over the past year, often in challenging circumstances. He also wished the incoming Chair of India the best of luck, emphasizing that the WDC is committed to achieving meaningful reforms and doing what it can to the support the KP in meeting its challenges.

The WDC President paid special tribute to Mark Van Bockstael who is retiring after 16 years as the Chair of the KP’s Working Group of Diamond Experts. “There are literally millions of people whose lives and livelihoods were dramatically improved by the tireless work of Mark and his colleagues, who created almost from scratch the methodology and knowledge-base on which the KP is founded. He is pioneer and one of us, and we are tremendously proud of him and his achievements,” Mr. Fischler said.