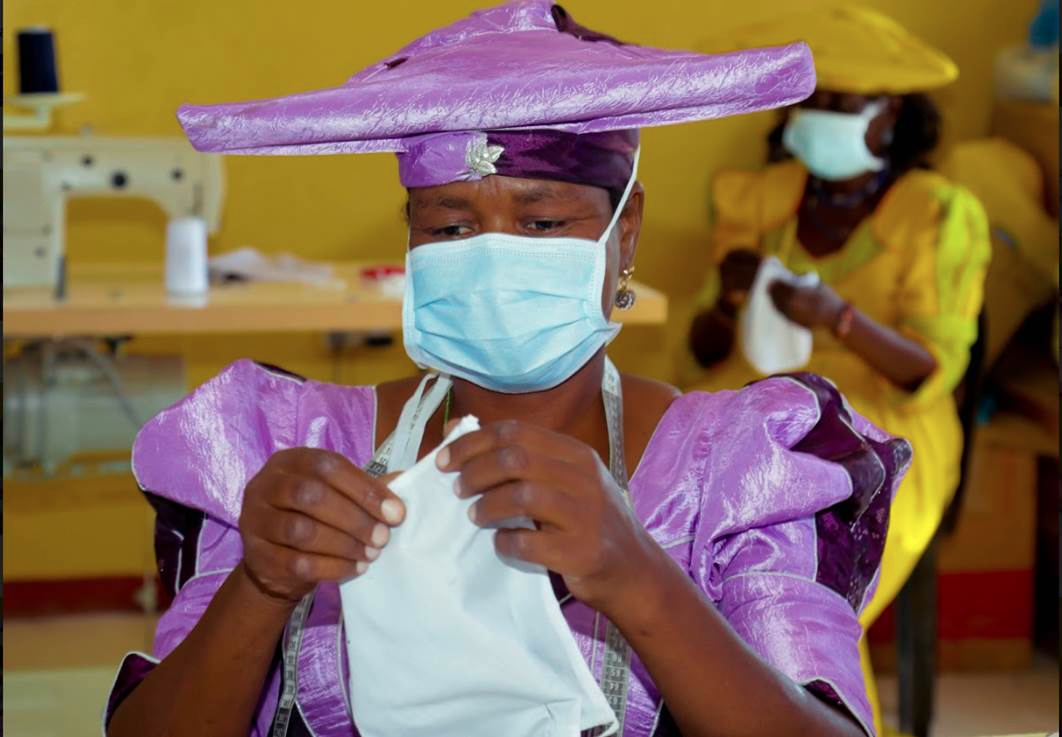 A tailor from the Boteti sub-district in Botswana, working at one of the local enterprises contracted by Debswana to sew reusable cotton face masks, which will be will be distributed to law enforcement officers, as well as other essential services workers and communities around the company’s operations.

More than four months into the COVID-19 crisis, it is difficult and most probably premature to gauge the impact of the global epidemic on the rough diamond industry and trade, and more specifically on the artisanal mining sector, where information is scarce and largely anecdotal. But the combination of a health crisis and economic crisis is likely to be devastating, and the ripple effects in those areas prone to conflict do give cause for concern.

Through the middle of May 2020, the number of confirmed COVID-19 infections in sub-Saharan Africa, where the major part of the continent’s formal and informal diamond mining sector is located, is relatively low. South Africa is the highest sub-Saharan country on the list, ranked 39th worldwide in terms of confirmed infections, but with a relatively low death toll of less than 250, which translates in 4 mortalities per 1 million residents. This compares to 268 per million for the United States and 501 per million for the United Kingdom. The next closest sub-Saharan country is Ghana, which is ranked 60th worldwide, with 28 deaths reported, translating into 0.9 mortalities per 1 million residents.

However, it is almost certain that the official data provided by the sub-Saharan African countries are considerably lower than what they are in reality. In part this is a result of COVID-19 itself, which is a disease in which many of those infected are asymptomatic, and quite probably are unaware that they are contagious. It also is a result of the often underfunded and under-staffed health care systems on the continent, which with 1 doctor per 5,000 inhabitants on average has the lowest physician density in the world. Few people are being tested and it is likely that numerous deaths are going unreported, especially in more remote regions.

But there are also compelling reasons why sub-Saharan Africa may be less affected than many other regions, with one being the median age of the population, which is under 20. This is a critical factor in a disease that has proven to most deadly among the older sectors of population. The region’s warmer climate may also be a factor, but that is discounted somewhat by the rapid spread of the disease in Latin America, and in particular in the warm equatorial areas of Brazil.

EFFORTS TO MITIGATE AND CONTAIN PANDEMIC

What should not be underestimated is the experience of certain African countries in dealing with infectious diseases, including diamond-producing countries like Liberia, Sierra Leone, Guinea and the DRC, all of which successfully contained the Ebola epidemic earlier this decade. Indeed, on February 3, 2020, relatively soon after the existence of the novel coronavirus was made public by the World Health Organization, the Africa Centers for Disease Control and Prevention established the Africa Task Force for Novel Coronavirus (AFCOR), to oversee preparedness and response to the global epidemic. At the time there were no confirmed cases of COVID-19 in Africa.

Among the private bodies sector bodies that moved quickly to help contain the pandemic were the diamond mining houses. On April 6, 2020, the De Beers Group announced that it will contribute $2.5 million across Botswana and Namibia to aid the response to the COVID-19 crisis. It also designed a comprehensive community response plan to provide the most effective and relevant support to host communities, which it developed through engagement with the communities, traditional and faith leaders, and government agencies to understand their needs both during the pandemic and into the economic recovery phase. In total, the company estimates that its monetary and in-kind support, which includes the procurement of medical supplies, logistical support, vulnerability assessment support plans, food security for vulnerable households, water supply to communities, COVID-19 awareness and education, and local clinical support, exceeds $5 million.

In Botswana, De Beers’ subsidiary Debswana, which it owns jointly with the country’s government, readied its own hospitals and clinics with necessary equipment and protective equipment, as well as streamlining hospital services to take pressure off other state resources. Mine ambulances were redeployed to support wider healthcare efforts, and portable housing facilities from its operations were sent to house healthcare workers and provide isolation rooms at local clinics. The company also procured three testing machines to support the national testing capacity, and it contacted local tailors to commission the production of 250,000 re-useable facemasks.

The economic fallout is likely to be profound. As jewelry sales in the major consumer markets plummeted, mainly as a result of government-imposed lockdowns and calls to the public to stay at home, the movement of goods through the distribution chain ground to a near halt.

So as not to overload the system, major mining houses reduced output. De Beers announced a revised production for 2020 guidance of 25 million carats to 27 million carats, down from the 32 million carats to 34 million carats that had been announced earlier. These moves coincide with reports from India that many diamond-cutting operations are instituting moratoriums on rough-diamond imports, to maintain balance in the pipeline.

But the types of discipline that can be imposed in the industrialized mining sector and the diamond production centers are considerably more difficult to achieve in the informal mining sector, particularly when a large number of people are entirely dependent on the revenues they generate for their daily livelihood.

The Zimbabwe Environmental Law Association (ZELA) began issuing regular reports of what was happening in the artisanal mining areas of its country, which while specific geographically most probably provides a snapshot of what is happening in other parts of Africa.

On March 27, 2020, the Zimbabwe government declared a 21-day national lockdown. At the time, there had been five confirmed COVID-19 cases, with one death. As ZELA reported, some artisanal mining operations reduced the number of workers at the mining sites, but in general there was little knowledge of the virus, and personal protective equipment was in short supply. Some mine owners feared that that if they stopped mining operations and went into self-isolation, they could lose their claims to other miners who may invade or take over during their absence.

The Zimbabwe Miners Federation (ZMF), which is a representative body of artisanal and small-scale miners, recommended that its members comply with safety and hygiene standards including social distancing, but at the same time urged them to continue mining operations.

Even if production is maintained, however, the challenge of selling the goods is considerable. The government of Sierra Leone, for example, reported that official revenues from diamond mining fell to $330,000 in April 2020, from $2.24 million in April 2019. “This means big trouble for Sierra Leone,” said the country’s mining minister, Foday Rado Yokie, in an interview with the Reuters news agency. “We’re praying that things start up again in the next few months, because this is completely debilitating to our economy.”

In its report released on April 30, 2020, ZELA and the Center for Natural Resource Governance (CNGR) expressed their concern that the pent-up economic pressure being experienced in the artisanal mining sector could lead to an increase in illegal acts when the volume of trade picks up in the market. There is a high risk that the opening of the mining sector will heighten money laundering, and illicit financial and mineral flows.

In the opinion of the report’s authors, the risk is highest in the ASM gold sector, but other minerals, including diamonds should be monitored as well. It is an issue that demands the attention of the Kimberley Process during the second half of 2020, and quite possibly in 2021.