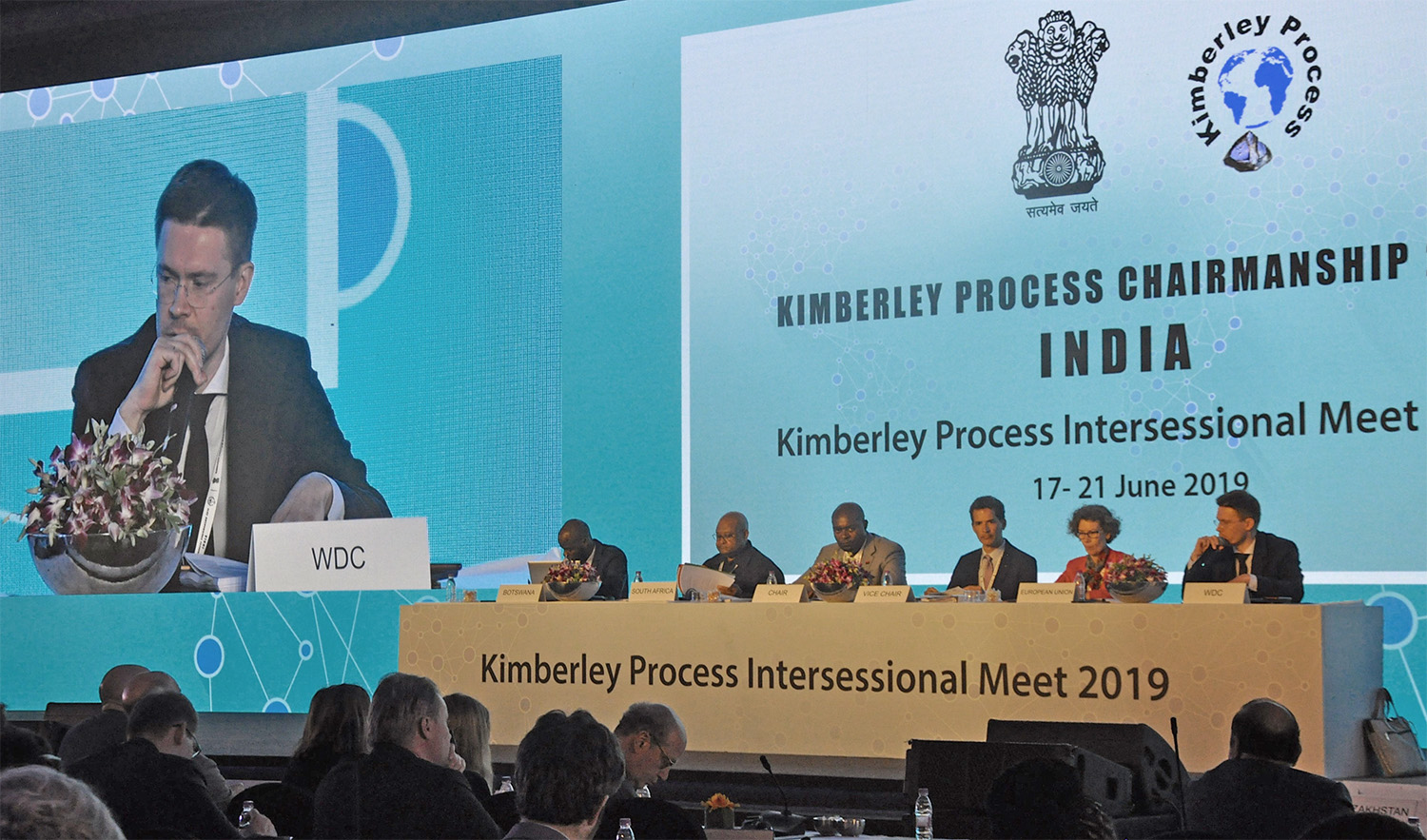 ABOVE: WDC Board Member Peter Karakchiev, who chairs  the sub-committee planning the establishment of the permanent KP Secretariat, addressing a session of the Ad Hoc Committee on Review and Reform (AHCRR), during the KP Intersessional in Mumbai, India, on June 18, 2019.

Members of the 82-nation Kimberley Process (KP) traveled to Mumbai from June 17 to June 21, for the first of two gatherings to take place in India during 2019. A range of issues were up for discussion, but dominating proceedings were the review and reform of the Kimberley Process Certification Scheme (KPCS), and in particular the expansion of its scope.

The KP is in the final few months of a three-year review and reform process, which is scheduled to end at the 2019 KP Plenary Meeting, which will be held in the Indian capital of New Delhi from November 11 to November 15. Since decisions within the KP can only be reached with the full consensus of all government members, the discussions conducted during the Intersessional Meeting and those that will take place in the remaining four and half months are of critical importance.

In the speech he delivered to the Opening Session of the Intersessional Meeting, WDC President Stephane Fischler drew a distinction between the concepts of review and reform. Review, he said, requires the improvement of the various instruments that the KP has created, so that the KPCS becomes more efficient and effective. The proposals on the agenda include a simplified and more consistent core document, a strengthened peer review mechanism, the creation a permanent KP Secretariat to replace the Administrative Support Mechanism that currently exists, and the establishment of a Multi-Donor Fund, which will assist financially-strapped nations to be fully involved in the KP and also support civil society in carrying out its duties. 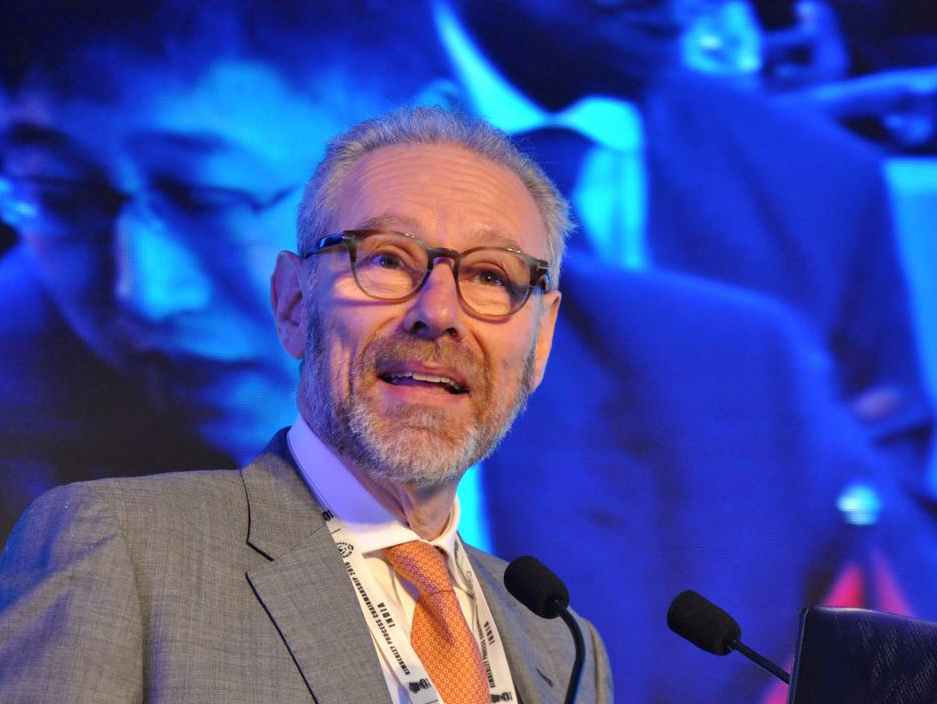 Reform, Mr. Fischler pointed out, is a more transformative process. The diamond industry, he said, believes that this must involve expanding the scope of the “conflict diamonds” definition beyond goods that finance armed rebellion. “We strongly believe that, by helping eliminate the trade in diamonds directly associated with instances of systemic violence, we can bring about a more responsible and ethical mining sector, thus enabling a fairer distribution of the benefits delivered to millions of people,” he stated.

While WDC’s observer status in the KP does not afford it voting privileges, which are reserved exclusively for government members, along with fellow observer, the Civil Society Coalition, it formulated a proposal for an expanded “conflict diamonds” definition, which was formally tabled by the Government of Canada at the 2018 KP Plenary Meeting in Brussels last November. The expanded definition would now include stones “acquired through systemic and widespread violence, forced labor, the worst forms of child labor, or through violations of international humanitarian law.”

A separate proposal is now being awaited from the African Diamonds Producers Association (ADPA), which is also a KP observer, and it is scheduled to be tabled following a meeting of African ministers scheduled to take place in mid-July.

The review and reform process is being managed by the Ad Hoc Committee on Review and Reform (AHCRR), which was created at the KP Plenary Meeting in Brisbane, Australia, in 2017. It is chaired by Angola, with Canada serving as the vice chair. It includes a series of sub-committees, each of which is tackling a different element of the process, among them changes to the KPCS Core Document, the Peer Review Mechanism, the Multi-Donor Fund, and the establishment of the permanent KP Secretariat.

Chairing the Permanent KP Secretariat Sub-Committee is Peter Karakchiev, a WDC Board Member from ALROSA, the Russian diamond mining company. The Administrative Support Mechanism, which the prospective body will replace, has been funded and operated by WDC members on behalf of the KP since it was first established in 2013.

Members of the WDC team at the 2019 Intersessional Meeting were closely involved in all meetings of the AHCRR, as well as its sub-committees. The subjects of review and reform were also discussed at length during a series of bilateral meetings held by the WDC with delegations from diamond producing countries, processing countries, consuming countries and fellow KP observers.

In his speech to the Closing Session of the Intersessional Meeting on June 21, the WDC President expressed confidence that the KP members will manage to find common ground and understanding in the process of reform. “This means that we all need to shift perspective, to ensure that the KP continues to deliver positive impact on the ground and also enhances the reputation of the diamond to consumers,” he said.

“My fellow KP participants, as we prepare for the final five months of this reform and review period, let us pledge together that, in Delhi in November, we will emerge united and empowered,” Mr. Fischler stated. “Let us ensure together that the diamond continues to hold its position as the world’s most popular gemstone, uniquely positioned as a symbol of love and commitment, and it remains a source of hope and promise for a better future, for people in all the countries in which it is produced – leaving no one behind.”