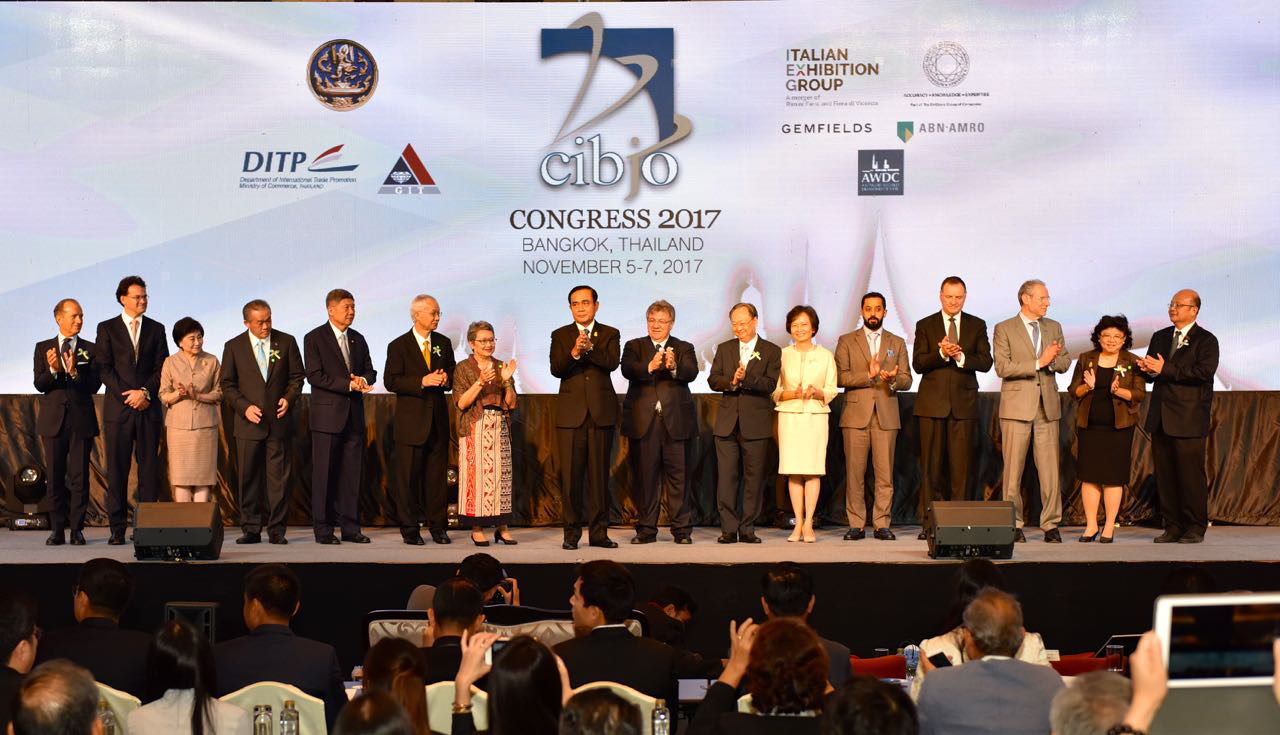 ABOVE: Prayut Chan-o-cha, the Prime Minister of Thailand, flanked by Thai government ministers and world jewelry industry leaders, at the opening of the CIBJO Congress in Bangkok in October 2017.

In 2001, shortly after becoming president of CIBJO, Gaetano Cavalieri joined other jewelry and gemstone sector leaders at a conference in New York. There they were attacked by representatives of human rights groups, who essentially accused the industry of complicity in crimes being committed by rebel groups plundering diamond fields in a number of African countries.

The event took place during the height of the conflict diamond crisis, several months after the establishment of the World Diamond Council, of which CIBJO was among the original members.

“What our critics were unaware of, or possibly they chose to ignore, is that the Kimberley Process had been established one year earlier, and for months governments, civil society and the diamond and jewelry industries had been holding discussions about an international certification system that could end the trade in conflict diamonds,” Dr. Cavalieri recalls. That system, the Kimberley Process Certification Scheme (KPCS), was launched worldwide at the beginning of January 2003.

CIBJO President Gaetano Cavalieri addressing the High Level Segment of the UN Economic and Social Council in Geneva in 2014, and being greeted by Pope Francis during a 2017 conference on ethics in business in Vatican City, where the CIBJO President was a featured speaker. 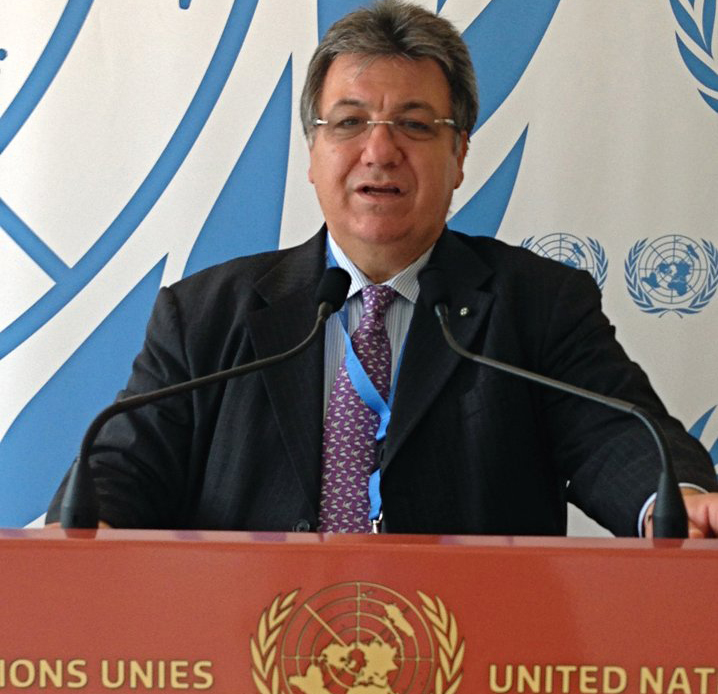 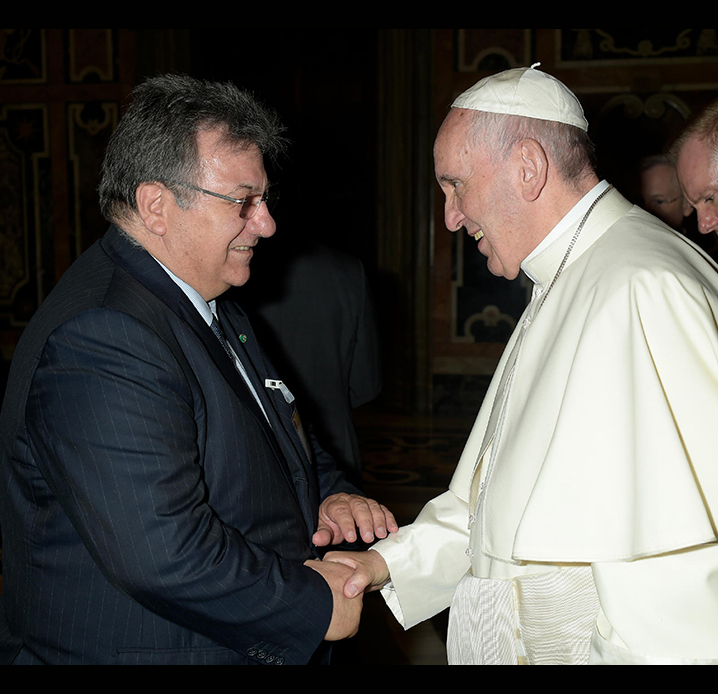 But for the CIBJO president, the experience of being publicly criticized was a seminal moment. “It convinced me that our industry needed a voice in the very places where human rights, ethical business principles and sustainable development were being discussed,” he said. The correct address for that was the United Nations Economic and Social Council, or ECOSOC, an agency that brings under one roof representatives of governments, business and civil society. One year earlier it had assumed the task of advancing the Millennium Development Goals, which had been declared in 2000 by the then-UN Secretary General, Kofi Anan.

“So just several months later, and again in July 2002, I traveled to New York and knocked on the doors of ECOSOC. My goal was that CIBJO, as the most representative body in the world jewelry industry, would come to be recognized as an NGO within the organization, just like those that had accused us of complicity in the conflict diamond crisis,” he said.

United Nations of the Jewelry Business

In many respects, CIBJO already functioned as the United Nations of the jewelry business.  Founded in Paris in 1926 as BIBOA, as an organization representing the interests of the trade in Europe, it was restructured as the World Jewelry Confederation (Confédération Internationale de la Bijouterie, Joaillerie, Orfèvrerie, des Diamants, Perles et Pierres) in 1961, with a global focus. Today, it unites national jewelry associations from some 47 countries, as well as international organizations and commercial members, which include many of the largest corporations operating in the industry.

These credentials, however, did not provide it easy access into ECOSOC.  “Both in 2001 and 2002, when I arrived at the United Nations, I was looked at as if I had landed from Mars,” Dr. Cavalieri remembers. “I was asked why a representative of a luxury industry, handling expensive and non-essential products, would be trying to gain access to a forum concerned predominantly with social justice and sustainable development in the developing world.  I was then shown to the door.”

It was not until July 2003 that the CIBJO president managed to arrange formal meeting at ECOSOC. Three year later the confederation received special consultative status in the body, becoming the first and only jewelry industry organization to achieve that status. That same year, CIBJO joined the UN Global Compact.

Over the years that have followed, CIBJO has come to be recognized as one of UN agency’s most active and effective NGOs, running joint projects with various United Nations bodies. It is among a handful of associations invited on a regular basis to address the ECOSOC High-Level Segments, both in New York and Geneva.

Given CIBJO’s role in the jewelry industry, the act of associating itself with ECOSOC and the Millennium Development Goals, and since 2015 the Sustainable Development Goals, has meant a great deal more than just responding to criticism from human rights groups. What CIBJO essentially did was to publicly commit the international jewelry industry, to work towards the fulfilment of the United Nations’ development agenda.

“Until then, our approach had been to focus almost exclusively on systems like the KPCS, which essentially were reactive, designed to ensure that our industry and products do not impact negatively on humanity or the environment. What we declared in 2006 was that we needed to do more. We had to leverage our businesses to bring about positive change – economic, social and environmental — for all stakeholders, and not only those at the top of the pyramid,” Dr. Cavalieri said.

In 2007 the annual CIBJO congress took place in Cape Town, the first time that such an industry event was held in Africa. There, the confederation ratified a statement that became known as the Cape Town Declaration. It recognized that the jewelry industry, as a member of the international business community, shares a responsibility toward the greater society 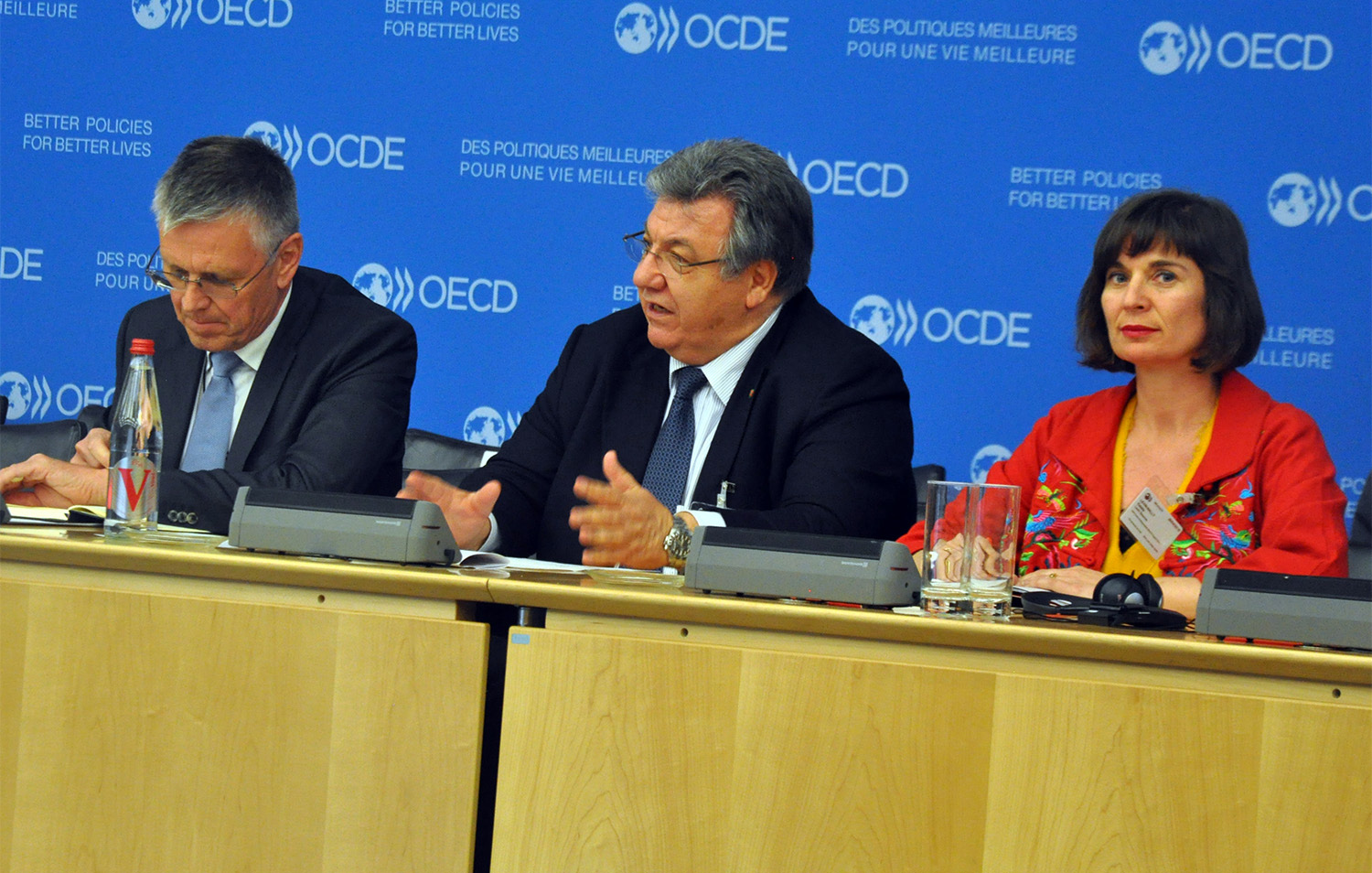 Declarations are simple. Putting them into practice was another thing. “We realized from the outset that our role in bringing about change would be educational,” Dr. Cavalieri said. “We needed to help transform the way we see for ourselves as members of society, and, as a consequence, the way in which our industry is viewed by others.”

In October 2007, a conference at the United Nations headquarters in Geneva was organized. Moderated by senior representatives of the UN Development Program, a comprehensive CSR training program for the international jewelry sector was discussed. The following year the World Jewelry Confederation Education Foundation, or WJCEF, was established to manage the program.

Over the years that have followed, CIBJO has run an ongoing series of projects and programs through WJCEF in centers around the world, as well as at trade shows, conferences and online. They included a one-day workshop in the UN Pavilion at the World Expo in Shanghai in 2010.

Philip Olden (far right), President of CIBJO’s Responsible Sourcing Commission, leading a panel discussion at the CIBJO Congress in Bahrain in November 2019. It featured jewelry industry leaders and a representative of UN Global Compact, who looked at supply chain integrity and the mission to meet the Sustainable Development Goals.

Among the various WJCEF projects was helping create what the UN refers to as a “Center of Excellence” in 2011 in Antwerp. This was done together with a number of Belgian organizations, including AWDC. To manage the center, a body was established to provide training to the young generation from developing countries, to help them adapt to the new business environment, and so compete in the global market.

More recently, in June 2020, CIBJO concluded an agreement with the Intertek Group, a multinational assurance and certification company, according to which an academy will be created to educate company officers and others about operating socially responsible and sustainable businesses. It will issue certification indicating that graduates have met the requirements that qualify them to serve as CSR and sustainability compliance officers in the jewelry sector.

Climate change has taken a large chunk of the confederation’s agenda over the past six years. In 2014 CIBJO set up its Jewelry Industry Greenhouse Gas Measurement Initiative, to help companies assess their environmental impact, and reduce and offset it through the purchase of carbon credits.

CIBJO collaborates with other industry organization in the areas of environmentally responsible practices. In Fiji, CIBJO assisted in formulating a plan for the development of a community-based, responsible pearl farming industry. CIBJO’s Coral Commission has also been coordinating a program with research bodies in Italy, Monaco and Japan, studying methods for reviving coral reefs impacted by global warming and ocean acidification.

CIBJO is often best known for its developments of international standards and nomenclature, for diamonds, colored gemstones, pearls, precious coral, precious metals and gemological laboratories. In 2019 the CIBJO Board of Directors approved a Responsible Sourcing Blue Book, which provides a framework and guidance for ethically sourcing gems and precious metals. It references the OECD’s Due Diligence Guidance for minerals from high-risk areas, supports the UN Guiding Principles on Business and Human Rights, and insists on compliance with the Kimberley Process Certification Scheme and the WDC System of Warranties. 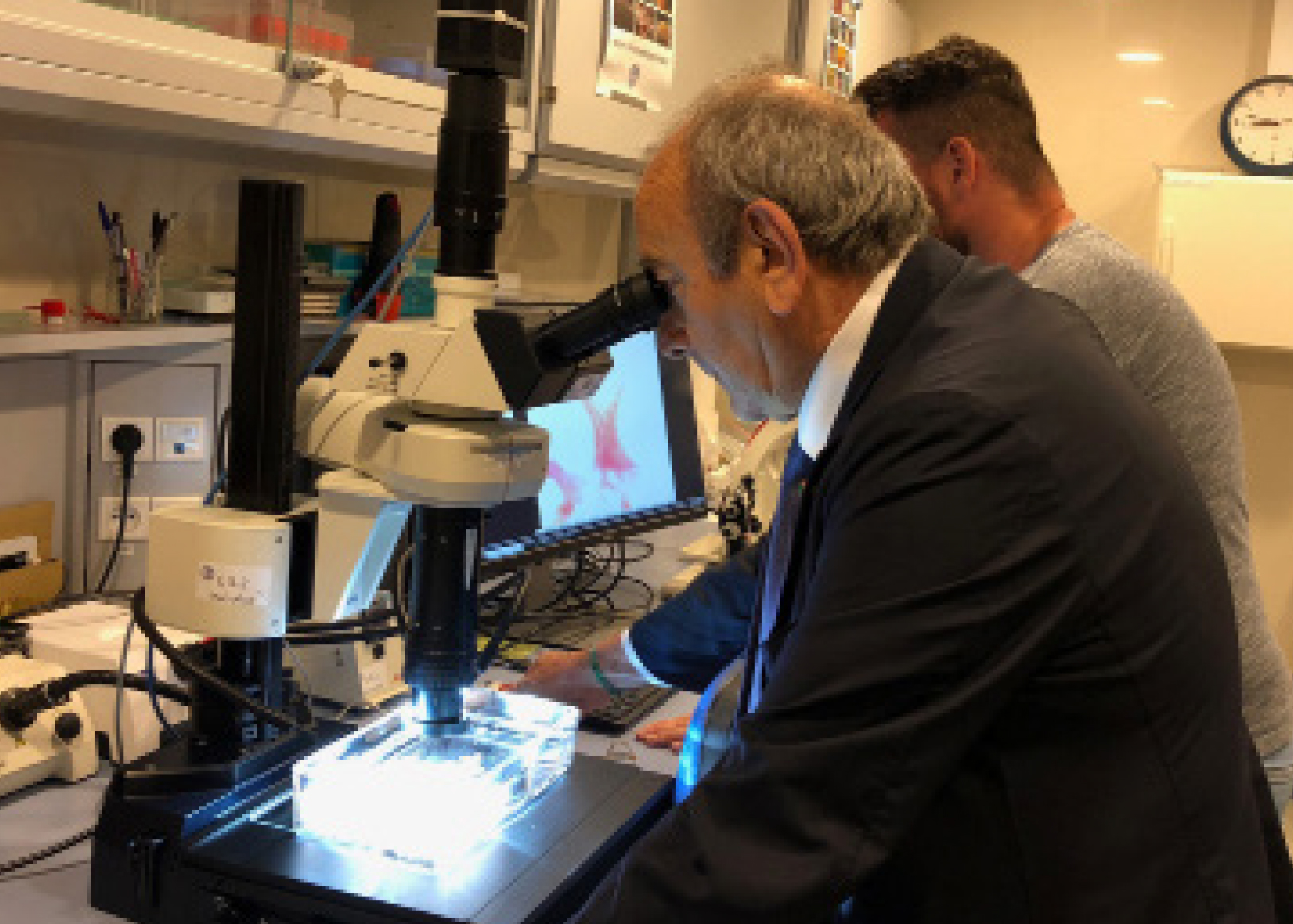 CIBJO Coral Commission President Vincenzo Liverino viewing coral micro-colonies being grown in a laboratory at the Centre Scientifique de Monaco, in Monte Carlo, in 2018. The institute is part of a project that is being coordinated by the CIBJO commission that is examining ways of  reviving coral reefs impacted by global warming.