UNITED RESOLVE AND COOPERATION WILL DRIVE US FORWARD 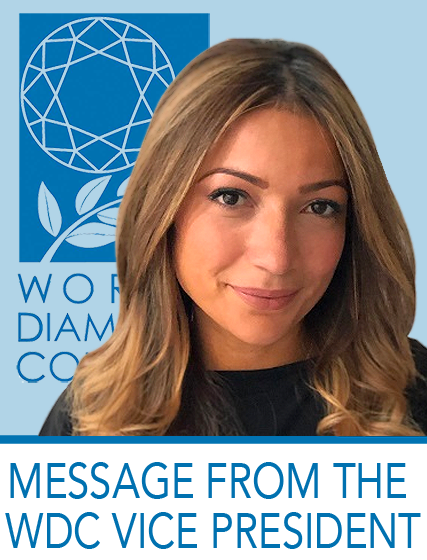 I’m delighted to be writing to you for the first time since being elected vice president of the World Diamond Council (WDC). In a year that brought such immense challenges for our industry, being appointed to this role was a source of both gratitude and inspiration for me – gratitude at being afforded the opportunity to take on a greater role in an organization that has been transformational in upholding the integrity of the diamond industry for more than 20 years;  and inspiration because I believe the role of the WDC has never been more relevant.

As consumer and industry expectations regarding conflict diamonds continue to evolve – which has only been further heightened by the pandemic – I’m energized and humbled to be part of the WDC’s ongoing impact and drive for continued progress, driven by our President Edward Asscher and previous leaders before him.

It’s also given me cause to reflect on my own journey in the diamond industry, which started not too long after the Kimberley Process Certification Scheme first came into force. While I didn’t know where my career would take me when I first started out as an analyst at De Beers Group in 2005, I knew early on that the movement to eradicate conflict diamonds from the supply chain and protect communities, while uplifting responsible sourcing standards, was where my heart lay. Little did I know this would be key in shaping the industry’s future. And, as it turned out, my own future in the industry.

Many of you may not be aware that I belong to a small community in a beautiful area called M’daourouch in the Aures Mountains of eastern Algeria in Africa. I am privileged to have been afforded the opportunities that I have due to the hard work of my parents. Many have not and I do not take this for granted, nor distance myself from these realities.  I’ve had an incredible journey, and many people both within and outside the industry have played a strong role in developing my knowledge and trust in believing what could be achieved.

My parents always empowered me to be curious, taught me to look beyond perceptions and be unapologetic about my values. They have been pivotal in helping me understand the strength of my own and others potential, and the value of working together for a common goal, despite our differences. This is what I love about our industry – we are all different, and our diverse views and experiences make us stronger.

With my analyst days now behind me, in more recent years I’ve led the establishment of De Beers Group’s own responsible sourcing and ethical practices criteria, of which the Kimberley Process (KP) is a foundational element. My key financial and analytical skills have given me the competency to really understand the sometimes challenging line to tread between commercial and ethical objectives, and to find progressive solutions on how the two align. This is what I call doing well by doing good. Through this work, I’ve been an active member of the WDC since 2014, working closely with many of you. I look forward to continuing in this new capacity.

The KP remains unprecedented in its structure and mandate – a UN-endorsed tripartite agreement between government, industry and civil society, backed by supporting legislation in all of the 82 KP member countries. It’s a notable achievement in and of itself.

The KP is a decision-making body. Decisions are based on consensus of the participating countries, and reaching consensus isn’t an easy task. Maybe I’m well versed in this given I’m one of five sisters, and we rarely agree on most topics. We all have our views and engagement takes time, but we do care and love each other and do not want to leave anyone behind. As my father says, we are five fingers of one hand and neither is the same, yet all are necessary for the hand to function.  The more I learn and engage, I believe the same can be said of the KP.

Industry and civil society, as non-government observers, have each played, and continue to play, a critical role in the KP’s activities and deliberations, despite the fact that we do not have the right to veto. Our voice is heard, even if decisions do not go the way we want them to. This gives me hope and drive, because I am a strong believer in the possible. Where calls for change do not come to fruition, I choose not to see it as a failure, but as a learning opportunity, and I push forward using the knowledge of the past to help shape the future. Continued progress relies on it.

Case in  point, the last KP Plenary meeting in which the WDC and Kimberley Process Civil Society Coalition jointly pushed for an expanded definition of conflict diamonds didn’t achieve the desired consensus. But it did demonstrate we’d come a long way from when the WDC first raised this issue more than a decade ago, with only one veto against a change at the 2019 Plenary.

For many of you who know me, I don’t shy away from difficult situations. I bring my beliefs and values to everything I do, and I see this development at the last Plenary as a strong sign for the possibilities to come. Bringing people along, actively listening to their concerns and having authentic dialogue, is what drives real change.

So we mustn’t lose sight of the progress that has already been made, while redoubling our efforts on what is yet required. While industry has already implemented complementary initiatives which go beyond the scope of the KPCS (notably the WDC System of Warranties and the Responsible Jewellery Council’s Code of Practices), it has a strong governmental role that industry cannot replace and remains a powerful and universal mechanism for underpinning consumer and retailer trust in diamonds.

Governments, communities, employees, and many other stakeholders rely on the strength of the positive impact that diamonds deliver, so I’m excited to help lead the WDC’s continued drive for progress and look forward to working in a proactive, cooperative and transparent manner. We may not always agree, and we may sometimes be too passionate, but I trust that we all have our hearts in the right place. Collectively, government, industry and civil society must push further forward on our shared focus to uphold the integrity of diamonds and protect those who rely on them in a responsible way.

Join us at the World Diamond Council if you share this vision.