Only eight words separate the declarations made on B2B invoices and memos by those members of the trade who have adopted the World Diamond Council’s new System of Warranties, from industry members still using the old SoW. But, while seemingly innocuous, those words are massively significant, for they greatly expand the scope of the system.

Whereas in the original declaration the seller of diamonds guaranteed that the merchandise is conflict free, “based on personal knowledge and/or written guarantees provided by the supplier of these diamonds,” in the new SoW the seller guarantees that the diamonds are conflict free “and confirms adherence to the WDC SoW Guidelines.”

The SoW Guidelines document, which is now an integral component of the SoW commitment, states that buyers and sellers of diamonds must observe the implementation of the KPCS, as it is expressed in the KPCS Core Document, KP Administrative Decisions and KP Guiding Documents. But it also states that buyers and sellers of diamonds understand and voluntarily implement a set of universally accepted principles on human and labor rights, AML and anticorruption measures.

More specifically, it references a set of seminal good-governance documents. What are they? 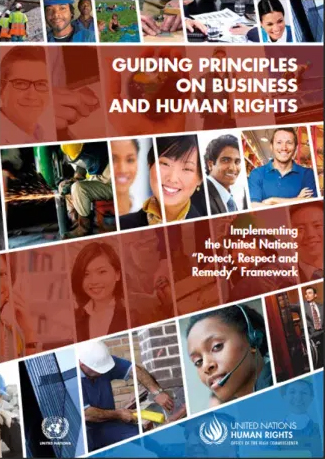 Endorsed unanimously by the United Nations Human Rights Council in 2011, the UN Guiding Principles on Business and Human Rights were the brainchild of John Ruggie, a Canadian American professor at Harvard’s Kennedy School of Government, who at the time served as the UN Assistant Secretary-General for Strategic Planning.

The document articulates 31 essential principles, outlining a state’s responsibility both to protect human rights and offer access to remedies in the event that those rights are not respected. It also addresses the business sector’s obligation to do due diligence so as to avoid infringing on the rights of others and to address any negative impacts.

From the perspective of business enterprises, the document prescribes six essential processes that need to be implemented: (1) developing a human rights policy commitment, and embedding it throughout the company; (2) assessing the company’s actual and potential human rights impacts; (3) integrating findings from the assessment into the company’s decision-making and taking actions to address them; (4) tracking how effectively the company is managing to address its impacts; (5) communicating to stakeholders about how the company is addressing its impacts; and (6) taking steps to remediate any negative impacts that the company may have contributed to.

The structure prescribed by the UN Guiding Principles on Business and Human Rights forms the basis of a number of conventions that today are widely observed and implemented in the diamond and jewelry sectors. These include the Responsible Jewellery Council’s Code of Practices, CIBJO’s Responsible Sourcing Blue Book and the OECD Due Diligence Guidance for Responsible Mineral Supply Chains. 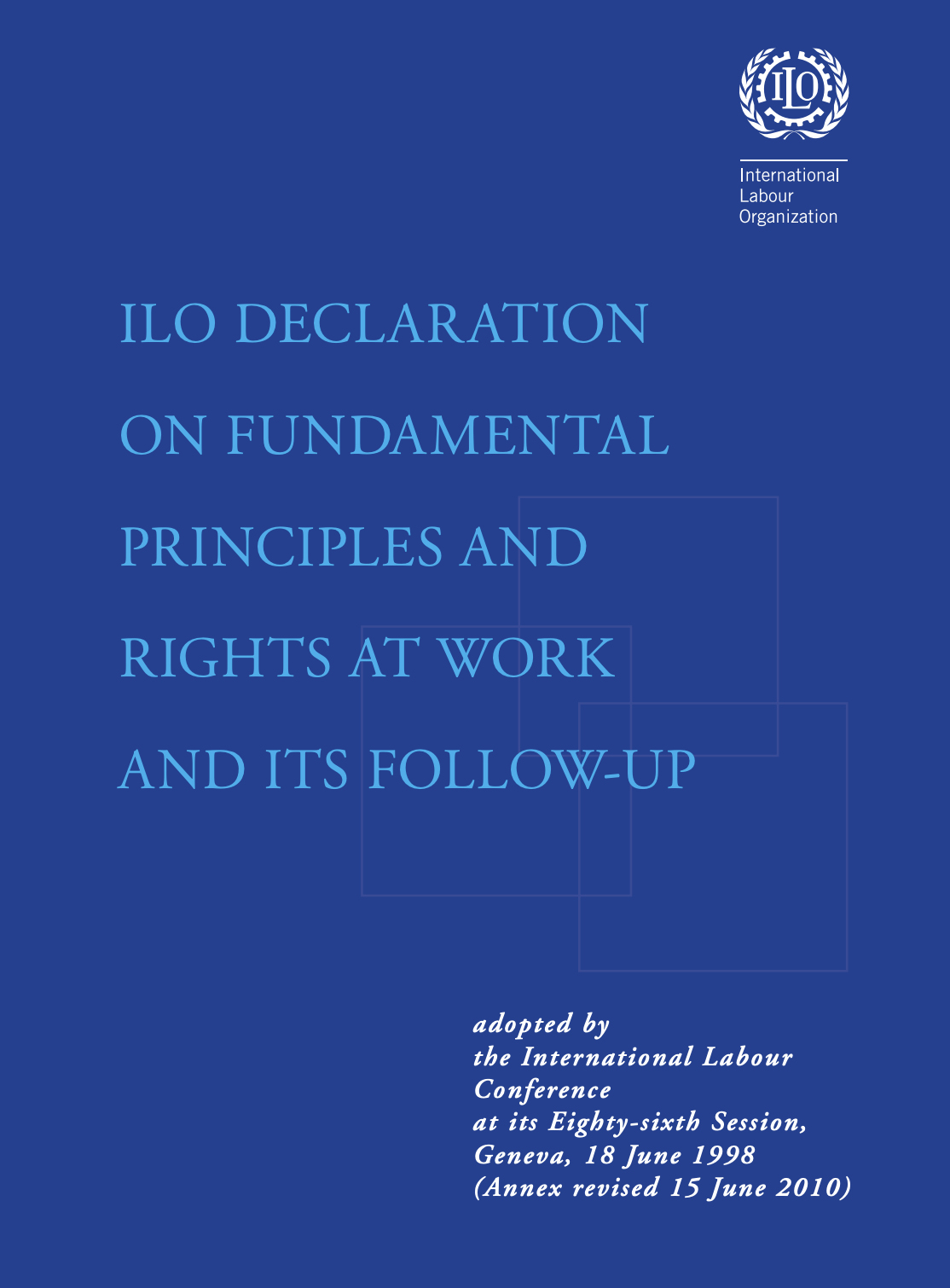 ILO Declaration on Fundamental Principles and Rights at Work

Established in 1919 as part of the Treaty of Versailles, the agreement that ended World War I, the International Labor Organization (ILO) was founded on a belief that universal and lasting peace can only be accomplished only if it is based on social justice.

In 1998, the organization ratified the ILO Declaration on Fundamental Principles and Rights at Work. It commits member states to respect and promote principles and rights in four categories. These are: (1) freedom of association and the effective recognition of the right to collective bargaining, (2) the elimination of forced or compulsory labor, (3) the abolition of child labor, and (4) the elimination of discrimination in respect of employment and occupation.

The declaration made clear that these rights are universal, and that they apply to all people in all states, regardless of the level of economic development. In particular, it mentions groups with special needs, including the unemployed and migrant workers. It recognizes that economic growth alone is not enough to ensure equity, social progress and the eradication of poverty. 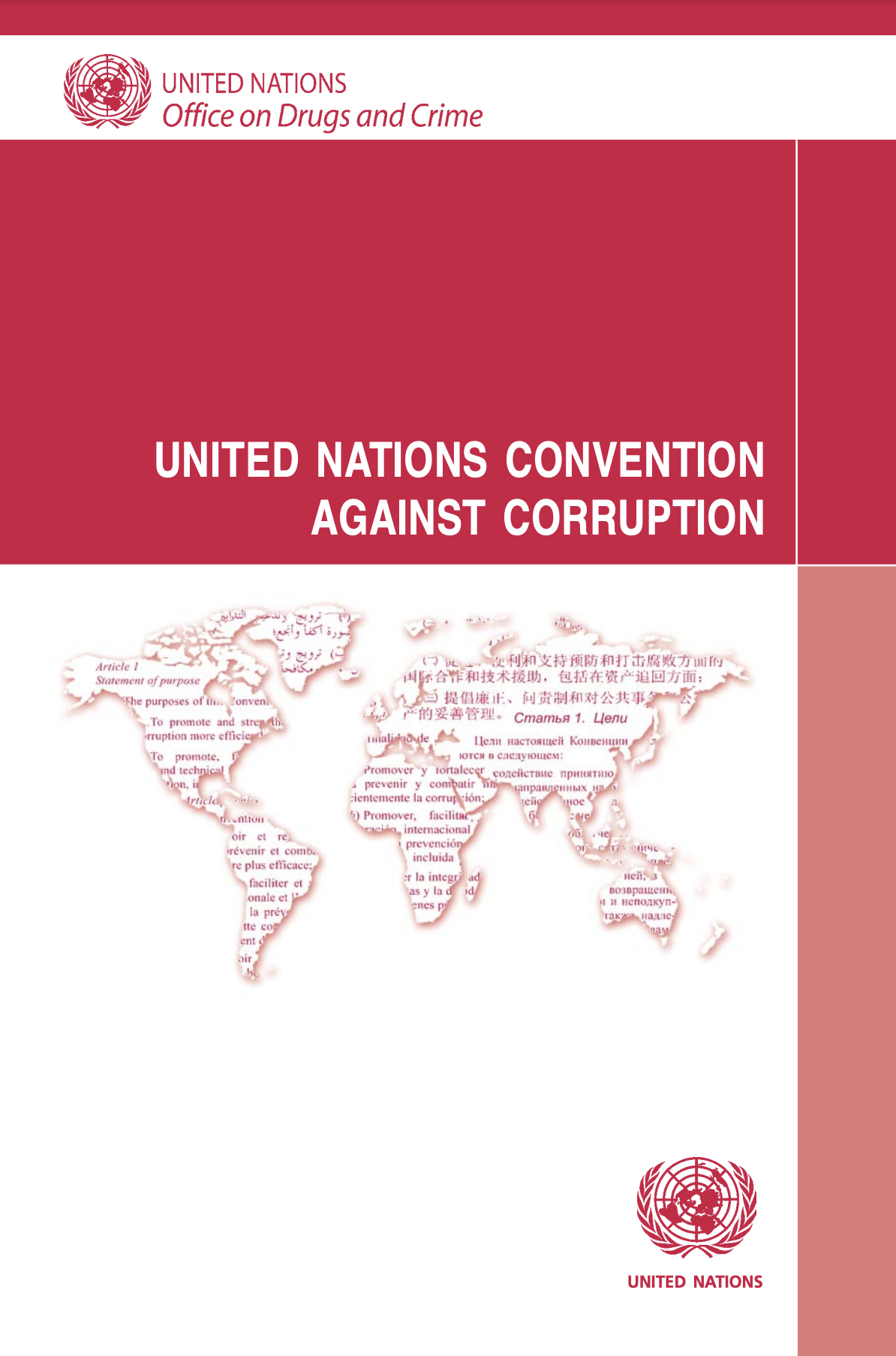 The UN Convention Against Corruption is a landmark, international anti-corruption treaty that was adopted by the UN General Assembly in October 2003. It is exceptional not only in its worldwide coverage but also in the extent of its provisions, which recognize the importance of both protective and punitive measures.

The document does not define corruption. Instead, it lists various acts of corruption and calls upon countries to establish a series of specific criminal offences to cover a wide range of relevant acts, if these are not already crimes under domestic law. They include bribery of national public officials, bribery of foreign public officials and officials of public international organizations, bribery in the private sector, trading in influence, embezzlement of property in the private sector, and laundering of the proceeds of crime.

Article 12 of the convention calls for the development of standards and procedures designed to safeguard the integrity of private entities, including codes of conduct that will prevent conflicts of interest, and the promotion of good commercial practices for businesses in their contractual relations with representatives of government. These include procedures regarding subsidies and licenses granted by public authorities for commercial activities. 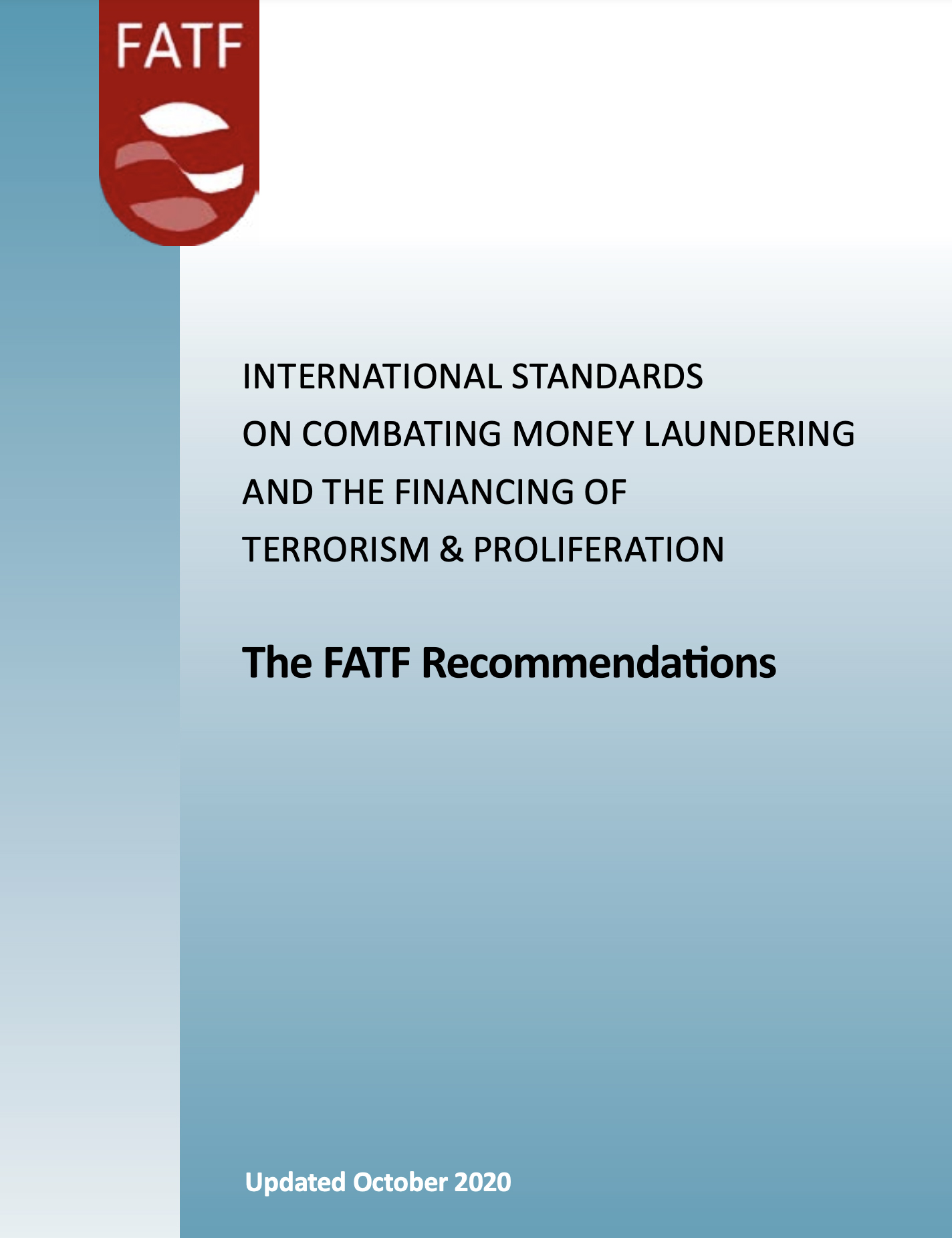 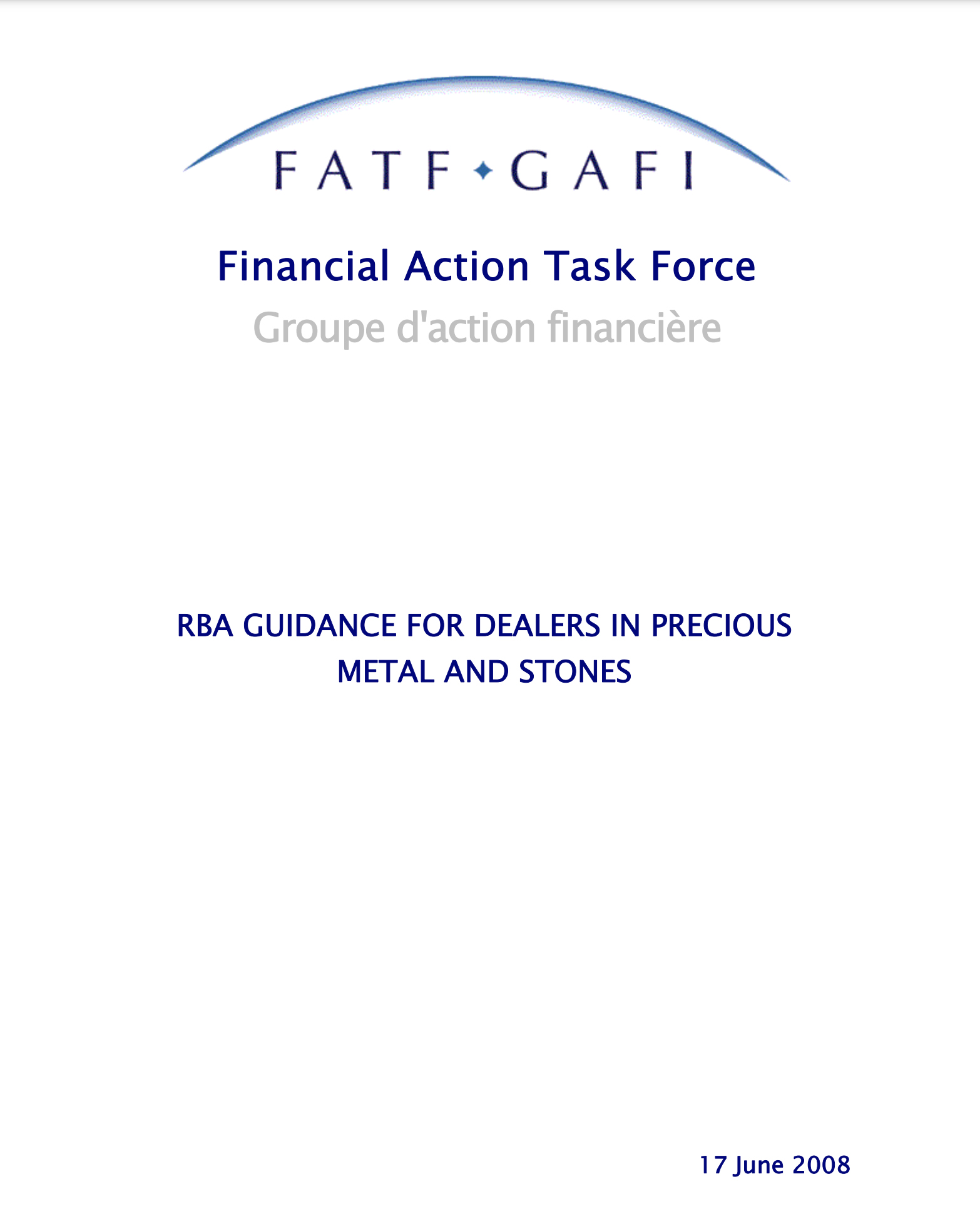 To download FATF’s risk based approach for combatting money laundering and terrorist financing in the precious metals and precious stones trades, CLICK HERE.

The Financial Action Task Force (FATF) is an inter-governmental watchdog body, which sets international standards to prevent money laundering and terrorist financing, as well as the financing of activities leading to the proliferation of weapons of mass destruction. It was founded in 1989 by the governments of the G7 leading industrialized nations and today comprises 37 member jurisdictions and 2 regional organizations — the European Union and the Gulf Cooperation Council – representing most major financial centers in all parts of the globe.

In 1990, the FATF released a set of 40 recommendations for states to combat the misuse of financial systems by the drug trade. In 1996, they were revised for the first time to reflect evolving money laundering trends and techniques, broadening their scope beyond drug-money laundering. In October 2001, following the 9-11 attacks the United States, the organization expanded its mandate to deal with the issue of the funding of terrorist acts and terrorist organizations, and developed eight special recommendations on terrorist financing, which later were increased to nine.

Recommendation 22  and Recommendation 23 of the FATF document identifies dealers in precious metals and precious stones as “designated non-financial businesses and professionals,” stating that they also should be subject to stringent anti-money laundering (AML) and anti-terrorist financing measures. The organization argues that precious metals and precious stones diamonds, with their relatively low mass, high value and easy transportability, have historically been used by criminals for the storage and movement of wealth, and thus should equated with currency.

In 2008 FATF published a guidance on the risk-based approach to combatting money laundering and terrorist financing for dealers of precious metals and precious stones, which it had developed in close consultation with representatives of these sectors.

It should be noted that the specific practices that need to be implemented by any diamond or jewelry company will depend on the laws applied in the country or region in which it is located. More often than not, these will comply with the FATF guidelines.