ABOVE: Members of the WDC Board of Directors meeting during the Annual General Meeting in Antwerp Belgium, on October 3, 2019.

The membership of the World Diamond Council (WDC) assembled in Antwerp, October 2 and 3, for the organization’s Annual General Meeting. But the focus of the gathering was elsewhere, on New Delhi, India, where the Kimberley Process Plenary Meeting is scheduled to take place November 18-22. It is there that the outcome of the three-year review and reform of the Kimberley Process Certification Scheme (KPCS) will be decided, and, more specifically, a decision will be taken whether to strengthen the scope of the certification scheme itself.

The AGM was hosted in Belgium by the Antwerp World Diamond Centre (AWDC), which also organized an industry dinner at the Antwerp Diamond Bourse on October 3 to celebrate the WDC. 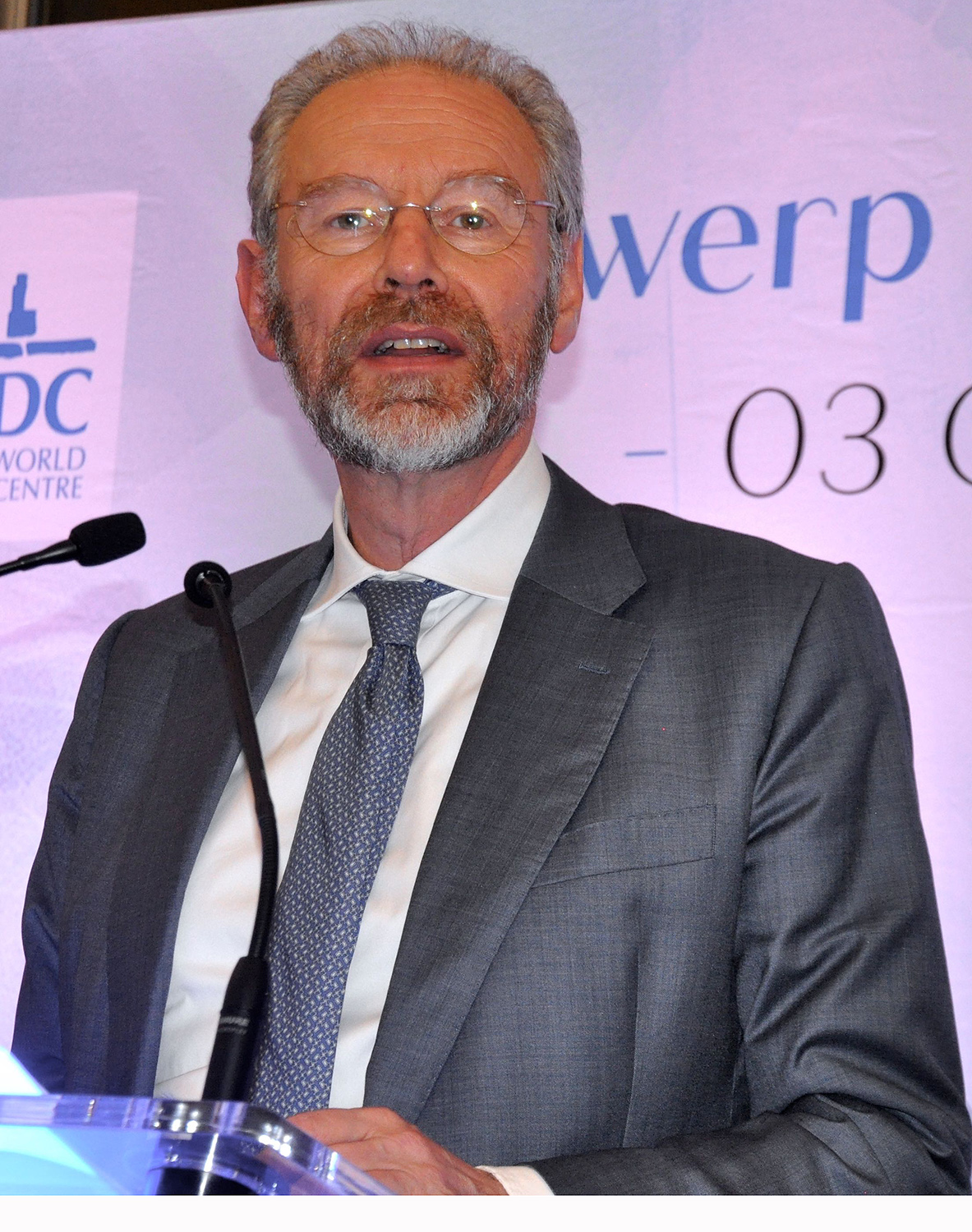 WDC President Stephane Fischler addressing the industry dinner at the Antwerp Diamond Bourse, which closed out the WDC’s Annual General Meeting on October 3, 2019.

In his report to the AGM, WDC President Stephane Fischler expressed a degree of optimism that progress will be made at the KP Plenary, but he was cautious in predicting a final result. “We have thus far judged our success by the fact that the KP membership agreed to engage the subject of reforming its infrastructure, scope and review mechanisms. That’s not an insignificant achievement in itself, for it implies recognition that there are problems that need to be addressed. Still, at this point in time, I must be honest and point out and I don’t know whether the KP will actually succeed in reforming itself, and in so doing ensure that the KPCS remains relevant,” he stated.

While the KP’s three-year review and reform process has touched on a number of topics, the most sensitive among them has been the proposal to strengthen the definition of  “conflict diamonds” beyond its more narrow scope today, which is limited to rough diamonds associated with the financing the activities of rebel groups against legitimate governments. The WDC and other KP participants have insisted that it be expanded to also cover the types of systemic violence now more likely to be seen in certain diamond-mining areas, including those carried out various security forces, as well as by criminal elements.

Several amendments to the conflict diamonds definition are currently being considered by the KP. The first was tabled by Canada, which was formulated together by WDC and the Civil Society Coalition, both of which have observer status in the organization. Others were proposed by Botswana and Russia.

The WDC is keen that progress be made on other elements of the KP’s review and reform program, which include WDC’s proposal to establish a Permanent Secretariat to better support the work of KP. It was formally adopted by the KP Plenary in Brussels last year, and the new structure is currently being discussed and planned by a sub-committee headed by Peter Karakchiev, a WDC board member. It will replace the Administrative Support Mechanism that today is being run by the AWDC with the support of the Israel Diamond Institute (IDA), the Gem & Jewelry Export Promotion Council (GJEPC) and the Diamond Development Initiative (DDI). WDC has made a commitment to co-finance the Permanent Secretariat. 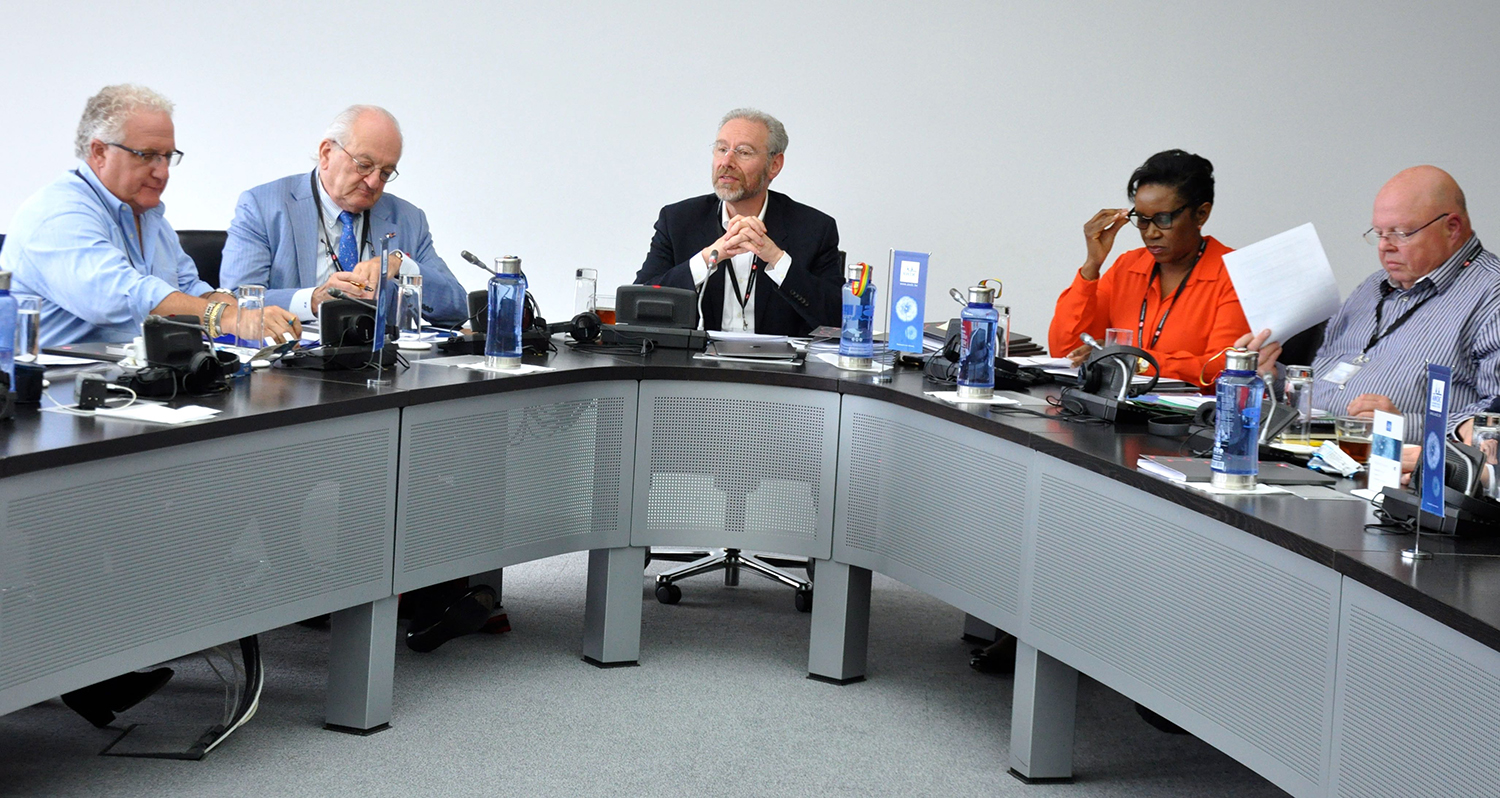 WDC has also been involved in the discussion about the creation of a Multi-Donor Fund that will be established to finance participation in certain KP activities by countries with limited resources, the participation of the members of the Civil Society Coalition, and support certain capacity-building projects. These elements are also part of the current review and reform process.

“These are extremely complex negotiations, where the North-South divide is apparent, and where different historical contexts must be acknowledged, for they shape perceptions and understandings,” the WDC President said in his report. “I must salute the very positive roles played by the EU as chair of the sub-group examining the scope of the KP core document, and Angola and Canada, respectively as Chair and Vice Chair of the Ad Hoc Committee for Review and Reform. We look forward to a positive outcome under India’s KP Chairmanship.”

Another primary focus of the AGM, and also a key element in WDC’s strategy moving forward is the new System of Warranties (SoW), which was approved by the organization’s Board of Directors during 2018. Covering the trade in both rough and polished diamonds, the scope of the SoW goes significantly beyond that of the KPCS. 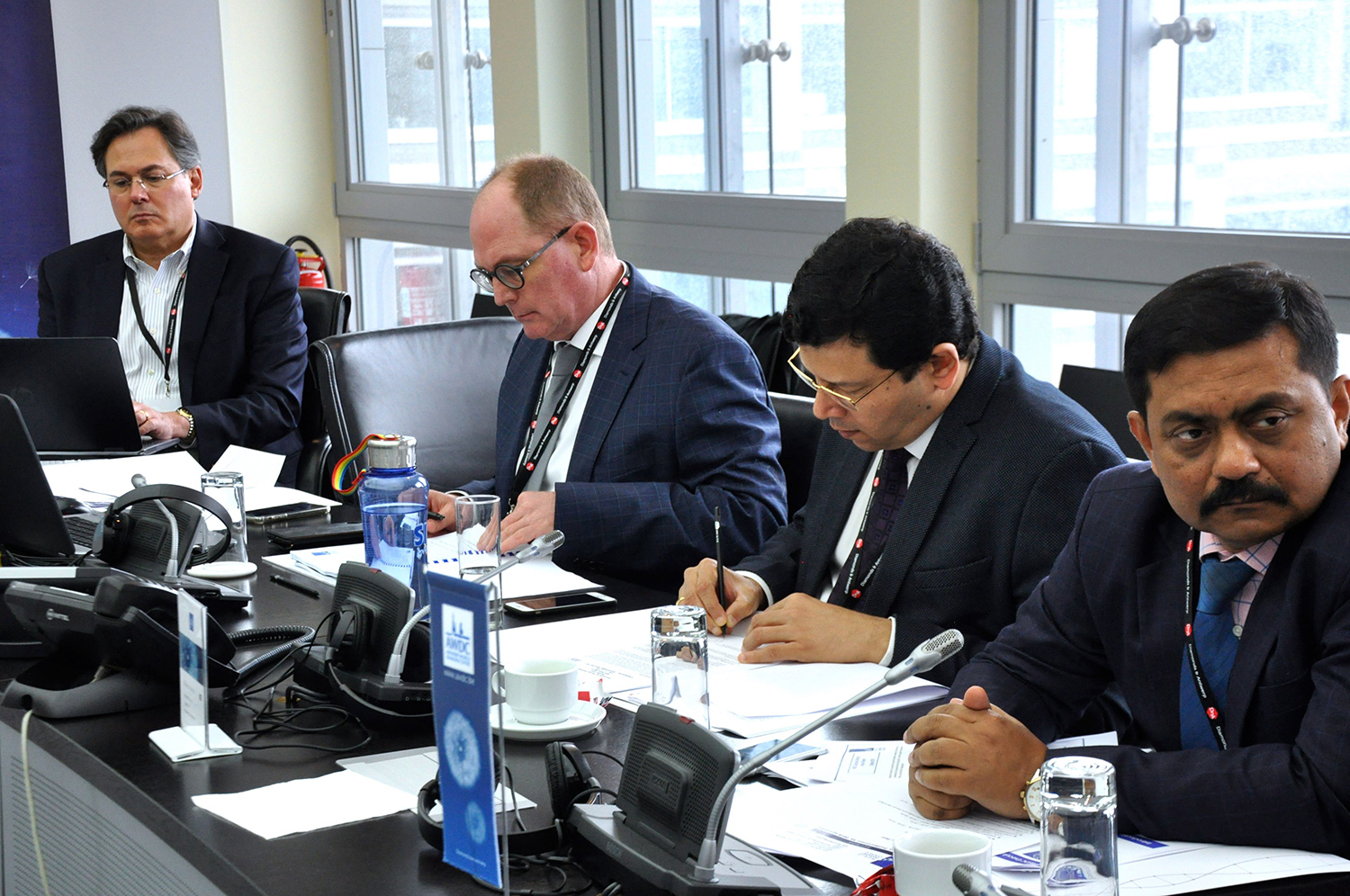 Participants in the meeting of the WDC Board of Directors on October 2, 2019 (from left): David Bouffard, Martin Leake, Pranay Narvekar and Sabyasachi Ray. 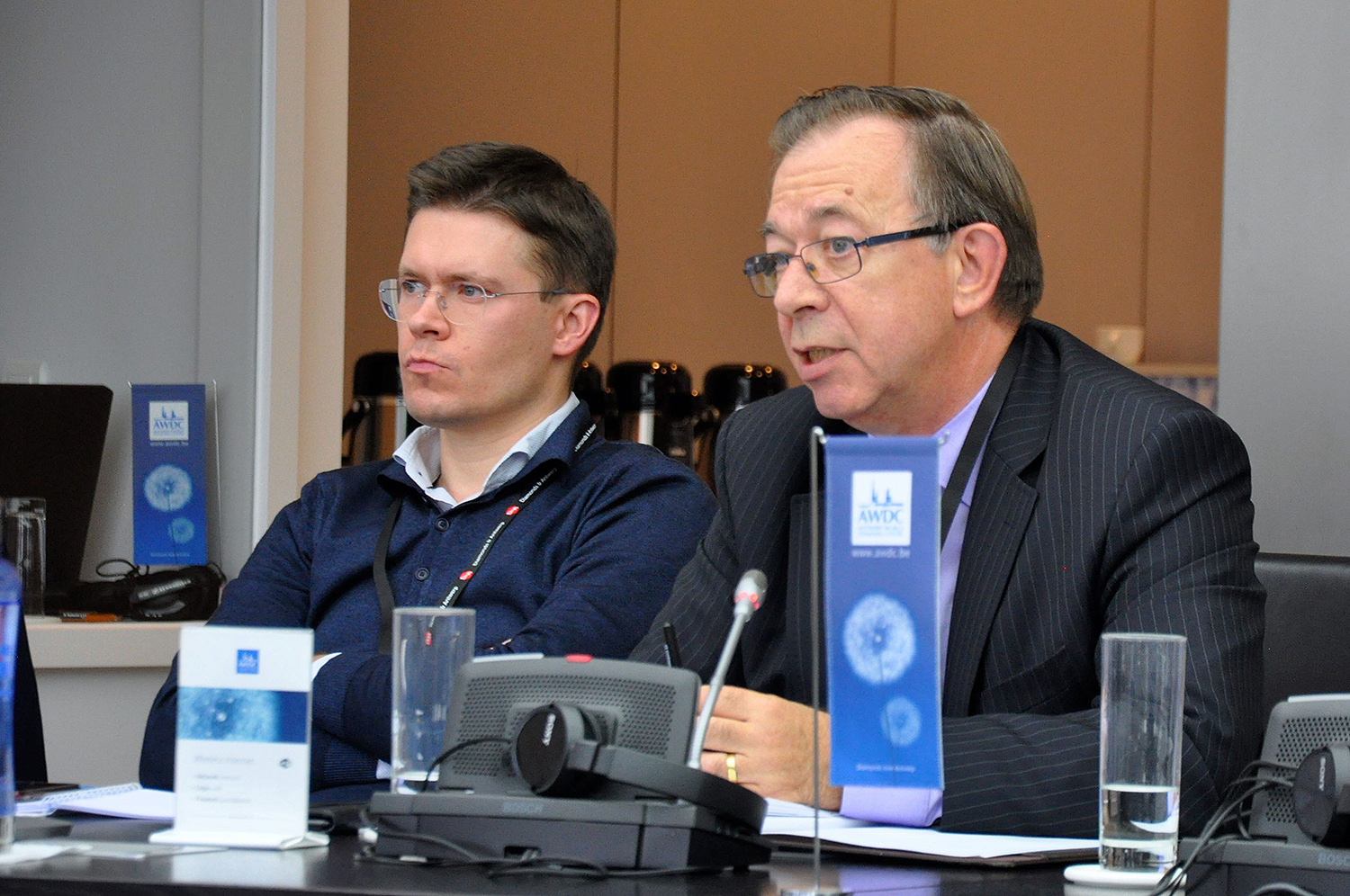 Peter Karakchiev (lef) and Mark Van Bockstael, the current and former chairs of the KP Work Group of Diamond Experts, during the meeting of the WDC board of October 2, 2019. 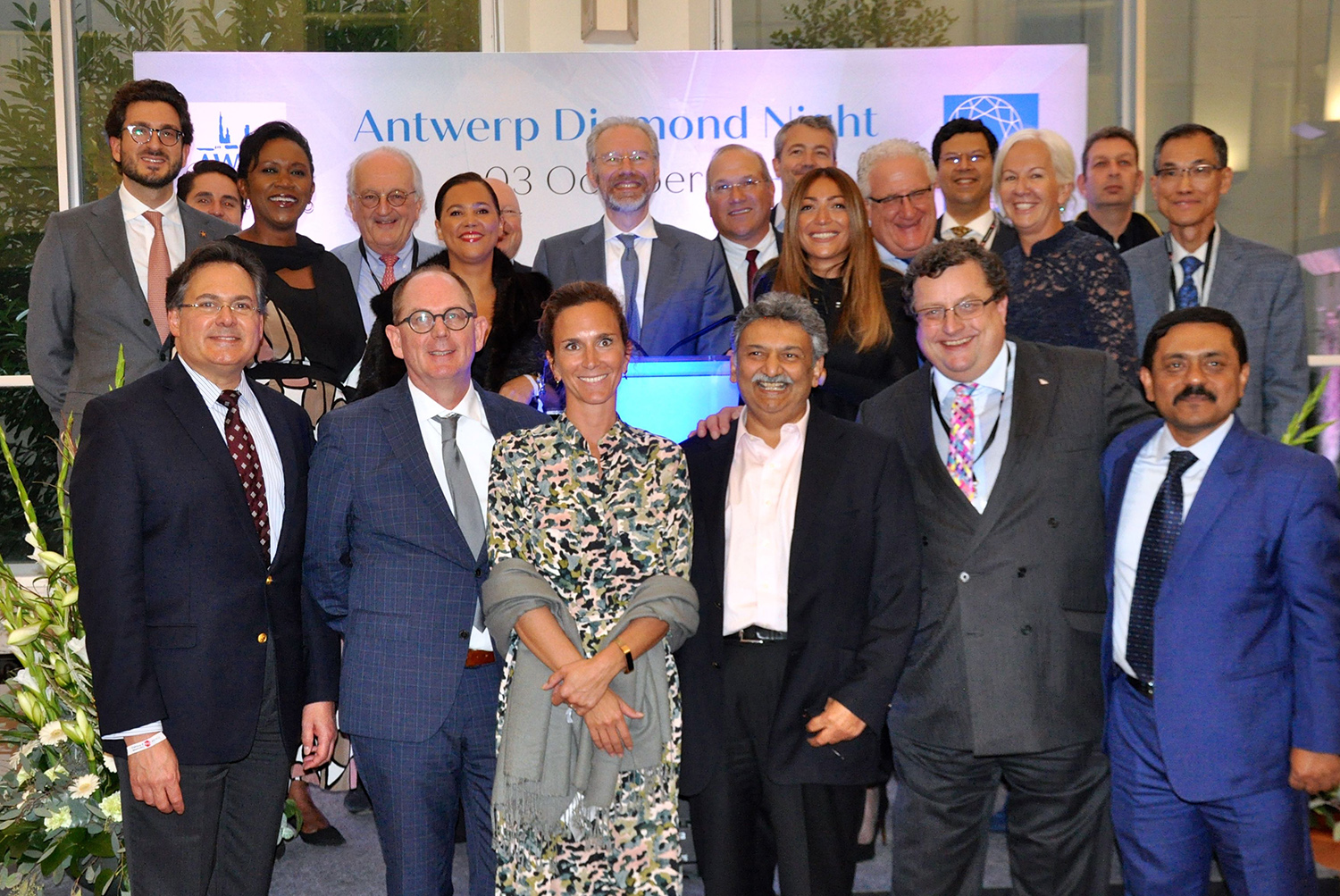 Participants in the 2019 WDC Annual General Meeting in a group photo at the closing industry dinner at the Antwerp Diamond Bourse on October 3, 2019.

Like the original SoW, the upgraded version requires that all members of the trade selling rough diamonds, polished diamonds and jewelry containing diamonds include a statement on the invoice or memo document that the goods being sold are in compliance with the KPCS. It also includes a commitment that they adhere to WDC Guidelines, which today expressly reference international conventions relating to human and labor rights, anti-corruption and Anti-Money Laundering (AML).

“We are all aware of the pressures upon us to be more transparent, particularly concerning the provenance of our products and the due diligence mechanisms being applied to ensure their integrity,” the WDC President told the AGM. “The new WDC System of Warranties will certainly contribute, and we are looking forward to providing the industry the tools necessary for using the mechanism throughout the whole supply chain.”

The toolkit that will assist diamond and jewelry companies implement the new SoW is currently under development, and it was discussed by the WDC members at the Antwerp meeting. The toolkit is scheduled to be released during the course of the coming year.

DOWNLOAD THE WDC PRESIDENT’S REPORT TO THE 2019 WDC AGM