In November 2018, with little fanfare, the diamond industry representative that had been most associated with the campaign against conflict diamonds for the longest period of time stepped out of the limelight. Mark Van Bockstael, who had served as the chair of the Kimberley Process’ Working Group of Diamond Experts (WGDE) since the body was created, passed the baton to a fellow World Diamond Council officer, Peter Karakchiev. 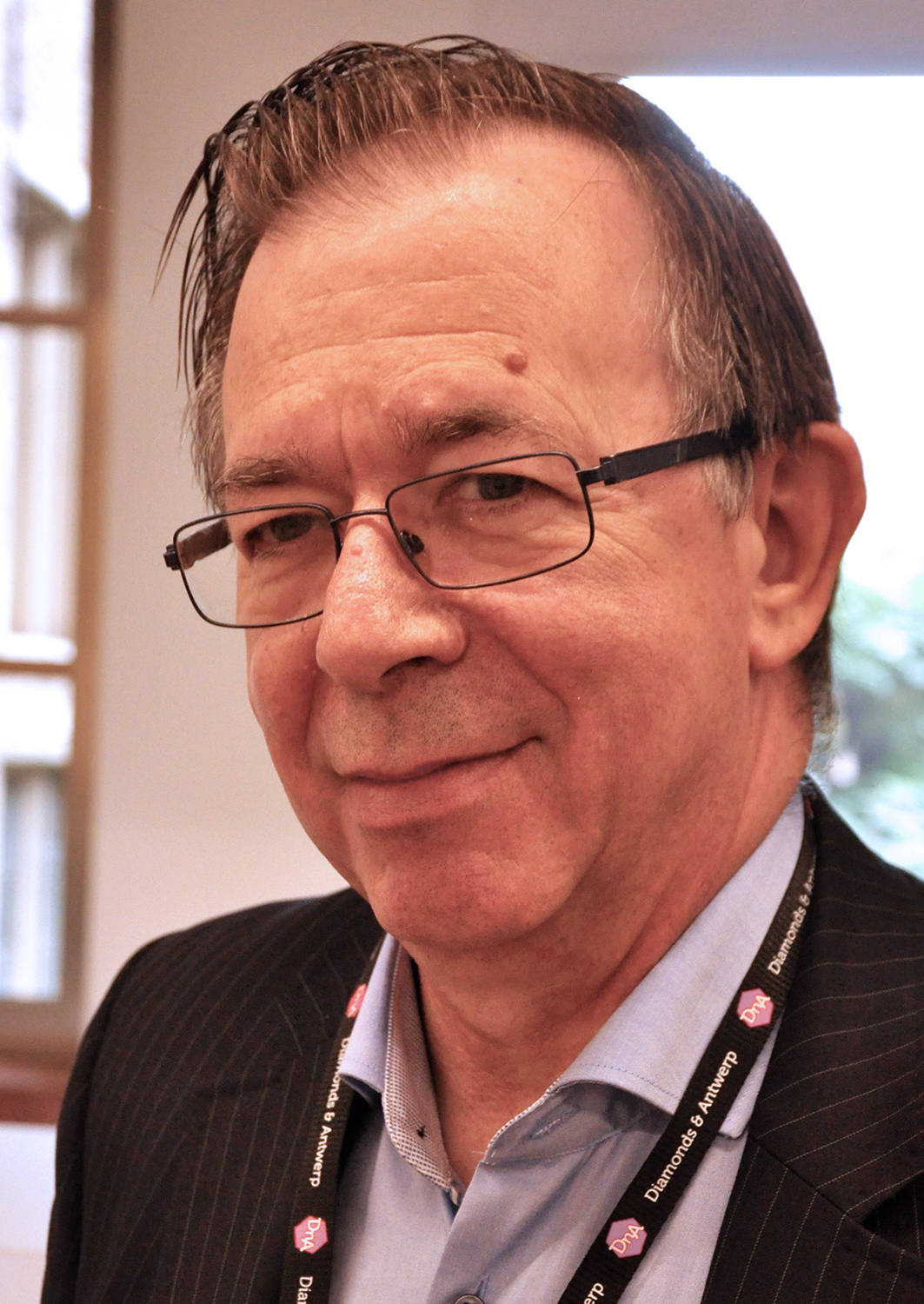 Mark Van Bockstael, the long-serving WDC official who many consider the architect of the Kimberley Process Certification Scheme.

Over a 20-year span there are unlikely any diamond industry officials who racked up more travel time and hotel nights in some of Africa’s most volatile locations. And it was a journey that happened almost by circumstance. “There was nothing that really prepared me for what was about to happen,” he recalled. “But then there were no real experts at the time or even a road map. We made the rules up as we went along.”

A geologist by training, up until 1999 Van Bockstael would have described himself as an educator, heading up the Institute of Gemology at the HRD, the Antwerp diamond sector’s umbrella organization that was the forerunner of today’s Antwerp World Diamond Centre (AWDC). In June of that year, the city was visited by Robert Fowler, Canada’s Permanent Representative to the United Nations and the chair of the UN Security Council’s UNITA (Angola) Sanctions Committee.

One year earlier the UN Security Council had passed Resolution 1173, imposing sanctions against the Angolan rebel movement UNITA, in response to its refusal to comply with the terms of a peace agreement. Among the measures taken was an embargo on imports of rough diamonds that had not been issued a certificate of origin by the Angolan government.

“Bob Fowler was looking for industry support in enforcing the sanctions regime, and I was brought in as the HRD’s senior gemologist, because it was thought that we may be able to help in providing a technological solution for identifying diamonds from Angola,” Van Bockstael said.

Initially the focus was primarily scientific. There was some promising technology that had been developed by the Royal Canadian Mounted Police, and locally, Van Bockstael roped in experts from universities in Leuven and Ghent.

“After only about three months we realized that there would be no fast solutions,” he said. “We were able to identify markers for some of the Angolan rough, but alluvial goods being mined across the border in the DRC had essentially been washed downstream from the north of Angola, making diamonds from the two countries virtually identical.” 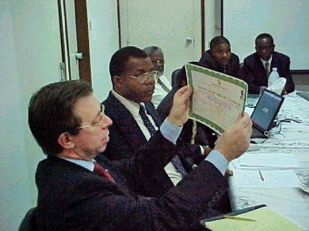 Mark Van Bockstael, holding up a new Angolan certificate of origin, during a meeting in the country’s capital of Luanda in December 1999. To his right is the Angolan Minister of Geology and Mines, Antonio C. Sumbula.

By September Van Bockstael was in the Angolan capital of Luanda, as the newly appointed chair of the HRD Task Force on Angola, helping local government officials develop a forge-proof certificate of origin that would enable the country to export rough diamonds in compliance with UN sanctions. It was introduced just three months later in December.

What was created was a bilateral arrangement operated by customs officials in Angola and Belgium. Each certificate issued in Angola generated an import confirmation certificate when the parcel arrived in Antwerp. This was returned to Angola to ensure that that the import and export statistics from the two countries matched. Thus, was developed the basic concept of a paper trail, which in time would evolve into the Kimberley Process Certification Scheme.

Things changed dramatically early in 2000. On February 3, CNN broadcast a documentary entitled “Cry Freetown,” providing an account of the victims of the brutal civil war in Sierra Leone. It depicted atrocities carried out by rebels from the Revolutionary United Front, who were seen seizing alluvial diamonds to fuel their campaign. It sparked a flood of news stories in the world media, many of which featured distressing photographs of children with dismembered limbs. 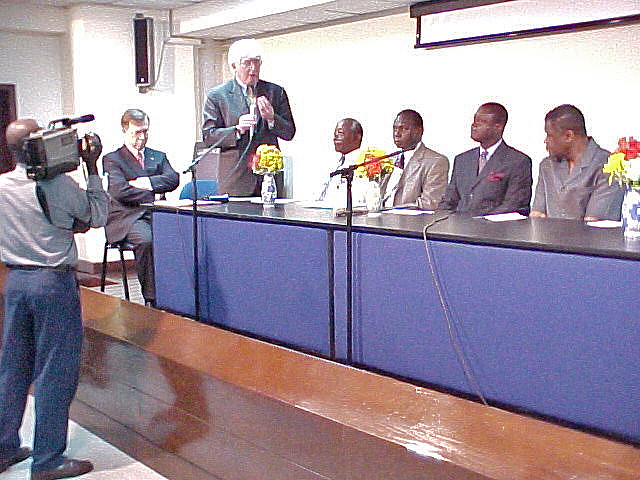 Mark Van Bockstael at the head of the table during a press conference in Freetown, Sierra Leone, on October 12, 2000, where a new Sierra Leone Certificate of Origin Regime was presented. Speaking is Willy Rotti, representing HRD. Third from right is Alhaji Mohamed Swaray-Deen, Sierra Leone’s Minister of Mineral Resources.

The United Nations released the Fowler Report on March 14, 2000. It was a devastating document, detailing how various companies and certain governments had been complicit in the violation of the Angolan peace agreement and UN-imposed sanctions. It highlighted the link between the illicit diamond trade and civil conflict.

On May 11 and 12, Van Bockstael joined the HRD Executive Director, Peter Meeus, in Kimberley, South Africa, at a gathering of government representatives. It was there for the first time that the concept of an international certification system for rough diamonds was discussed. The location of the meeting, which is the birthplace of the modern diamond mining industry, was to give its name to the process, and less than three years later to the certification scheme that was developed.

July 2000 was a critical month. It began just five days in with the United Nations Security Council passing Resolution 1306, prohibiting the direct or indirect import of all rough diamonds from Sierra Leone for a period of at least 18 months. The resolution also called on the country’s government to ensure, “as a matter of urgency,” the effective operation of a certificate of origin regime for the trade in diamonds, and urged international organizations and other bodies to provide support.

Two weeks later the World Diamond Congress was hosted in Antwerp. Usually an industry-only event at which meet the general assemblies of the World Federation of Diamond Bourses (WFDB) and the International Diamond Manufacturers Association (IDMA), this time it attracted broadcast and print media from around the world, government ministers and legislators from different countries, UN ambassadors and a host of human rights organizations. 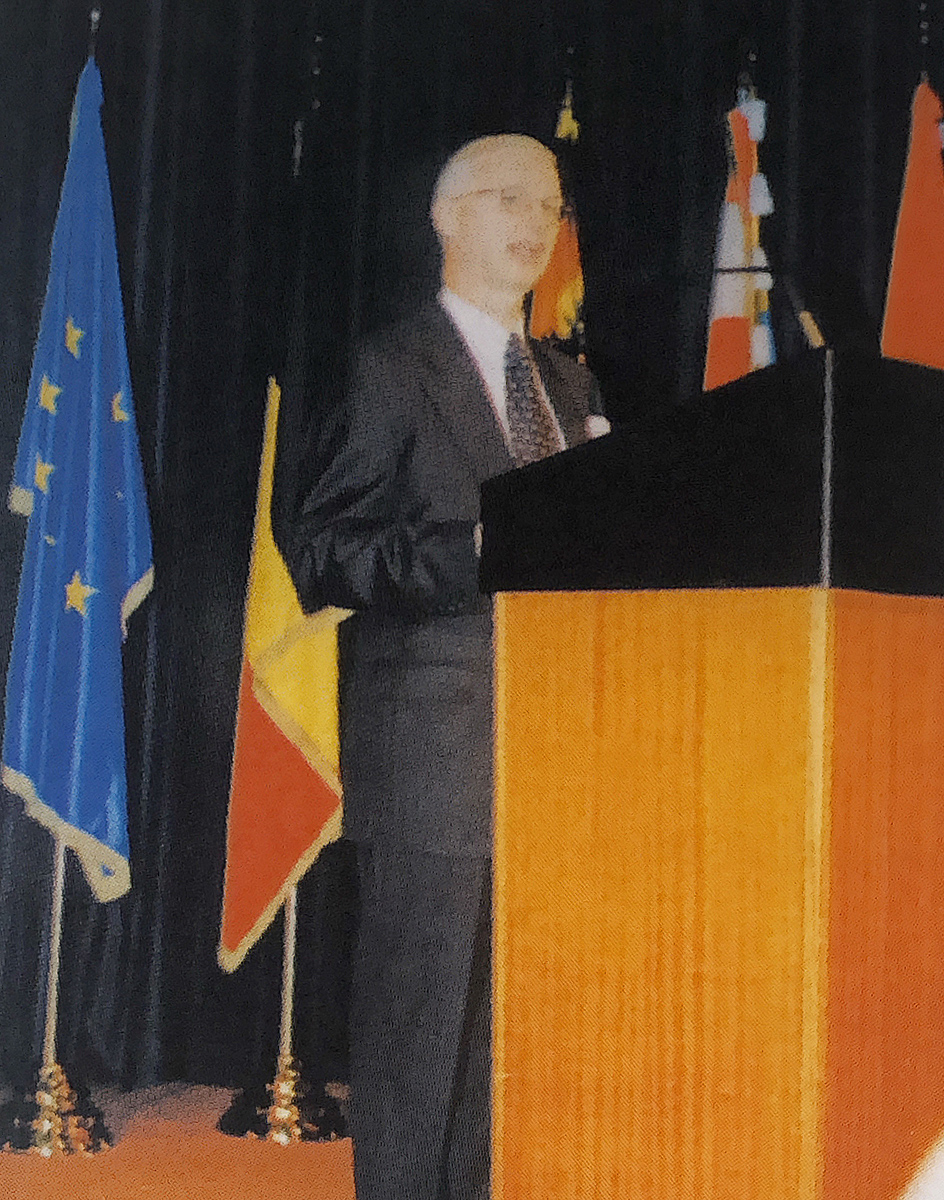 WFDB and IDMA passed a joint resolution to create an association that would represent the industry in the campaign to eliminate the trade in conflict diamonds. Its resident technical expert would be Mark Van Bockstael.

“The original plan had been to call the new organization the International Diamond Council, but then someone remembered that such a body already existed,” recalled Van Bockstael. “A slight adjustment was made, and so was born the World Diamond Council.”

Drawing from his experience from the previous year, Van Bockstael was the lead author of a paper released in September 2000 entitled the “WDC System for International Rough Diamond Export & Import Controls.” Discussed at meetings in Windhoek, Namibia, and then Pretoria, South Africa, it was presented as a working paper at an inter-governmental conference in London on October 25 and 26, hosted by the United Kingdom. A decision was made to forward it for discussion at the United Nations General Assembly.

On December 1, 2000, the UNGA passed a resolution that became the framework for the introduction of a global certification system, which would require nations to devise and implement national legislation covering rough diamond trading activity.

It would take another two years and one month before the Kimberley Process Certification Scheme would become operational on January 1, 2003.

“What was achieved out of a tragic set of circumstances most probably has very few, if any precedents,” commented WDC President Stephane Fischler, speaking on October 3 of this year during the industry dinner that closed out the organization’s Annual General Meeting. “The act of a business sector not only agreeing to be regulated voluntarily, but actually proposing the regulatory system that would be imposed upon it was unusual. So was the coalition that was created involving government, business and civil society, which was established to design and implement it. Also, out of the ordinary was the speed at which an international system, which required legislation to be passed in every country and region that was part of it, was phased in and made effective.”

For Van Bockstael, the certification system’s architect, it was a 20-year journey, which still has not quite ended.