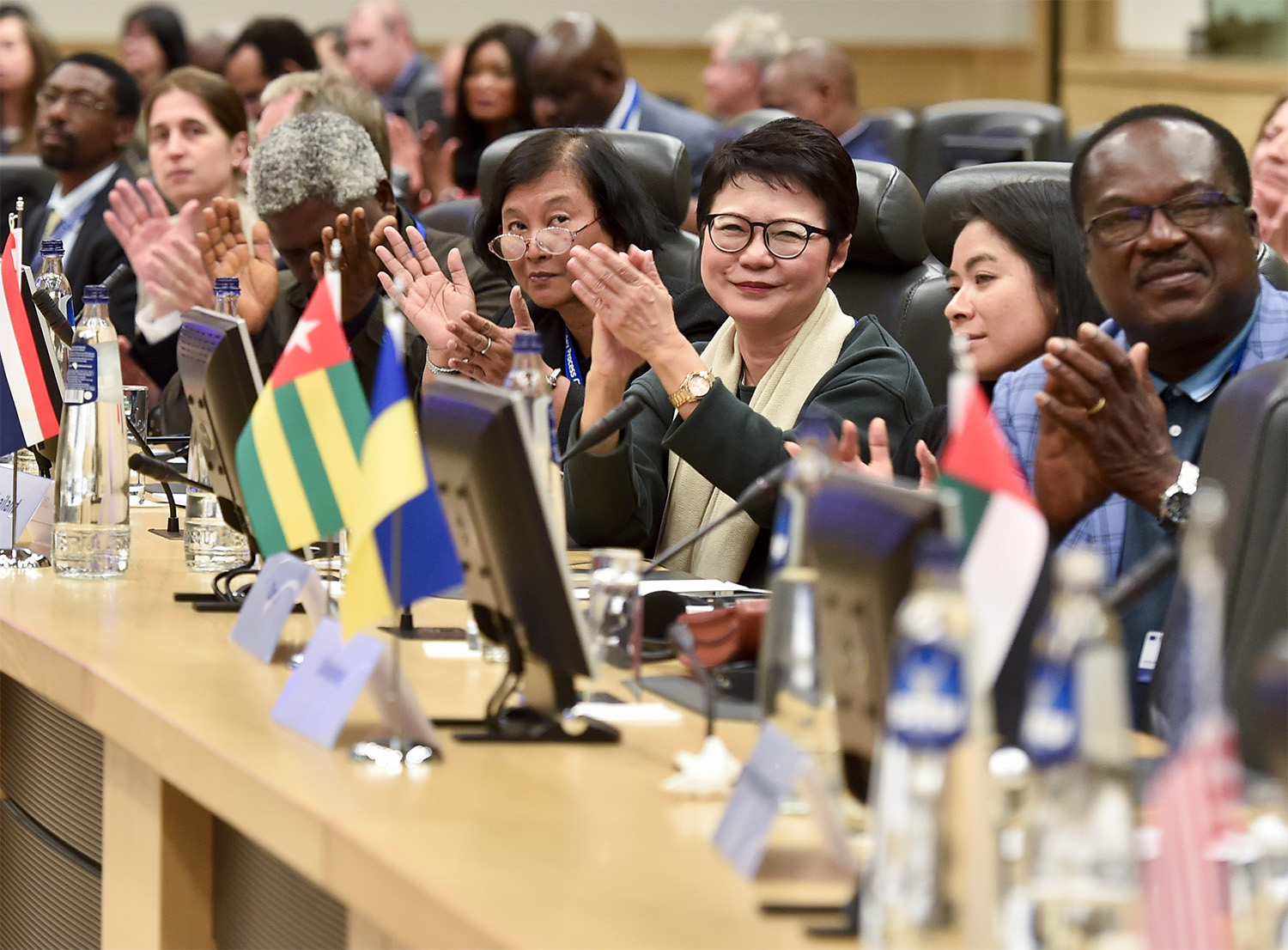 ABOVE: Representatives of KP-member countries applauding during the organization’s 2018 Plenary Meeting in Brussels.

Regulating the flow of rough goods into the diamond pipeline, the Kimberley Process (KP) is today one of the most powerful institutions in the international diamond sector.  But it is a conflict prevention body without any judicial or legislative authority in any of the countries with which it is associated. This is because KP rules and the Kimberley Process Certification Scheme (KPCS) are administered and enforced by sovereign states, operating according to statutes and regulations that have been approved at the national level, or in the case of the 28 European Union-member states by the European Council. So, from where does the KP derive its strength?

Essentially its power is derived from its members and other participants, or rather from their agreeing, as a condition of KP participation, to operate according to its rules and decisions, which can only be reached by consensus. It is also vested in a self-monitoring system, where countries are obliged to provide data about imports and exports of diamonds, and periodically subject themselves to review visits by representatives of peer countries and official KP observers, which include industry and civil society.

It is a system that can be wieldy and cumbersome, but also effective, having the ability to eliminate the presence of almost all rough diamonds financing civil war within just several years of the KPCS being launched in 2003. On occasion it has even operated outside its mandate, addressing instances of violence that did not clearly fall within the scope of the official definition of “conflict diamonds,” because all participants recognized its authority to do so.

While without voting privileges, which are reserved exclusively for sovereign states and the EU, as an official observer representing the diamond industry the WDC plays a key role in the KP. In fact, the system by which the KPCS operates was developed from a working paper written by a team of WDC experts.

Additionally, since 2013 WDC members have operated the KP’s Administrative Support Mechanism, which provides ongoing logistic and managerial assistance to the KP Chair and officers. WDC representatives are active on all committees and working groups, leading several of them, and also participate in peer review visits to KP member countries.

Kimberley Process participants during a session of the 2019 KP Intersessional Meeting in Mumbai, India.

Chaired by the WDC, WGDE is a technical working group, charged with providing solutions to technical challenges and problems in the implementation of the KPCS. Among the tasks it has been assigned with are proposing changes to the “Harmonized System Codes” for rough diamonds to the World Customs Organization, the harmonization of valuation methodologies, the transfer of diamond samples from exploration projects, and providing technical information to other Kimberley Process bodies or international organizations. Up until 2018 it was led by WDC veteran Mark Van Bockstael, and today its chair is Peter Karakchiev, a WDC Board member.

The WGM deals with issues relating to the implementation of the KPCS. It is responsible for the peer-review mechanism, organizing review visits in participating countries, as well as conducting assessments of annual reports submitted by KP participants.

The WGS ensures timely reporting and analysis of statistical data on the production and trade of rough diamonds from all KP-member countries, with the aim of being able to identify anomalies and ensure the effective implementation of the KPCS.

As the most recently-created working group within the KP, the WGAAP has been charged with developing effective internal controls on the production and trade of alluvial diamonds, enabling artisanal and small-scale diamond miners obtain legal access into the chain of distribution. In many respects its work reflects the growing role of the KP in capacity-building in member countries.

COMMITTEE ON PARTICIPATION AND CHAIRMANSHIP (CPC)

Made up of previous KP chairs, as well as representatives of the WDC and the Civil Society Coalition, this committee assists the Chair of the Kimberley Process in handling the admission of new participants, and consults in cases of non-compliance by other participants. The previous year’s KP Chair serves as CPC Chair.

COMMITTEE ON RULES AND PROCEDURES (CRP)

Two other special committees are currently playing an important role within the KP. These are:

Created in 2017, the AHCRR is charged with overseeing the review and reform process currently underway within the KP, which is due to due to end in November of this year. The bulk of its work is taking place in four sub-committees, each of which is tackling a different element of the process, which include amending the KPCS Core Document, strengthening the peer review mechanism, establishing a multi-donor fund to assist participants with limited financial reserves, and the establishment of a permanent KP Secretariat to replace the Administrative Support Mechanism. Chairing the Permanent KP Secretariat Sub-Committee is WDC Board member Peter Karakchiev.

In 2013, the KP embargoed exports of rough diamonds from the Central African Republic (CAR) after rebels seized control of the country. In July 2015, the organization agreed that CAR could resume exports, as long as it established “green zones” compliant with KP rules, from where they could originate. The CAR Monitoring team was established to oversee the legal exports of diamonds from these areas.