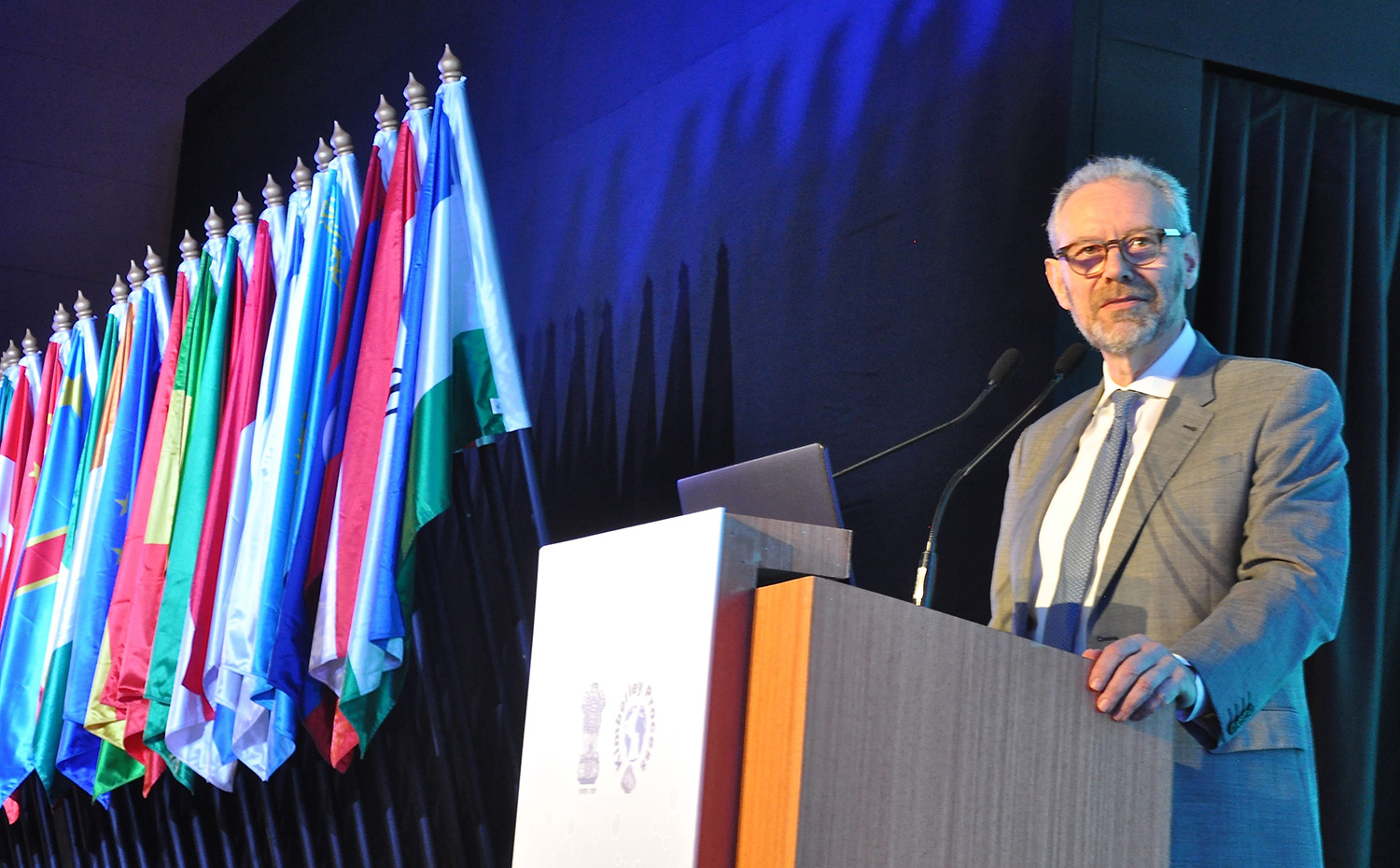 ABOVE: WDC President Stephane Fischler addressing the Opening Session of the 2019 Kimberley Process Intersessional Meeting in Mumbai, India, on June 17.

WDC President Stephane Fischler has called on Kimberley Process-member governments to do what is necessary to safeguard the interests of their mining communities, and in so doing optimize the developmental potential of their natural resources. He was speaking during the Opening Session of the 2019 Intersessional Meeting of the Kimberley Process (KP), which opened today in the Indian city of Mumbai.

“We must agree that the Kimberley Process should ensure that each government takes responsibility to ensure a chain of provenance, earning the trust of consumers wherever they are, and in so doing produce the revenues that must filter back to the grass roots of the mining communities,” Mr. Fischler stated.

Historically, he noted, one of the most critical factors determining whether a country’s economy is able to take advantage of  the potential offered by its rough diamond deposits is the relative absence of ongoing conflict and violence.

“There is a dramatic disparity between the development level of those countries and the others that suffered the tragedy of civil war, Mr. Fischler stated. “Only today are some slowly realizing the opportunities that their commodities could offer, in helping maintain the peace and allowing for nation building.”

The Intersessional Meeting is one of two gatherings of all KP participants that will take place in India in 2019, which is the final year of a three-year reform and review process underway in the organization. “The Kimberley Process has today a one-time opportunity to make a difference in those countries where the diamond industry has not yet met its developmental potential,” he said.

Mr. Fischler delineated  the elements that distinguish review from reform. Reform, he said, involves enhancing internal processes, so that the KP can “make better use of the instruments we ourselves have created, or will create in the future, for the benefit of the members, to generate a more efficient and effective organization.” These, he said, include a simplified and more consistent core document, a strengthened peer-review mechanism, the creation of a permanent secretariat, and the establishment of a multi-donor fund to ensure that all participants are capable of being fully active within the KP.

Reform is a more fundamental process, the WDC President stressed, noting that in its case industry believes the definition of what constitutes “conflict diamonds” should be expanded. “We strongly believe that, by helping eliminate the trade in diamonds directly associated with instances of systemic violence, we can bring about a more responsible and ethical mining sector, thus enabling a fairer distribution of the benefits delivered to millions of people,” he stated

While the diamond industry and civil society  will do all that they can to support constructive change as observers in the KP, ultimately it will be up to governments to reach consensus on the  review and reform that is required, Mr. Fischler said.

“We need you, the country representatives, to have the courage to look into the eyes of your own people –  the men, women and children active and living in the diamond-mining areas. They ask that they be allowed to live, rather than simply survive. They request safety and security for themselves and their families, and to be dignified with a proper wage, so that they may build a better future for themselves and their children, and contribute proudly as citizens,” he said.

“We are relying on each of you, during this final year of the review and reform process, to show the consumers of diamonds that the Kimberley Process can unite around a program that will ensure better care and protection of your brothers and sisters,” Mr. Fischler said.

Prior to the opening session, the WDC hosted an Observers’ Forum with the other official observers in the KP, including the Civil Society Coalition (CSC), the Diamond Development Initiative (DDI) and the African Diamond Producers Association (ADPA). 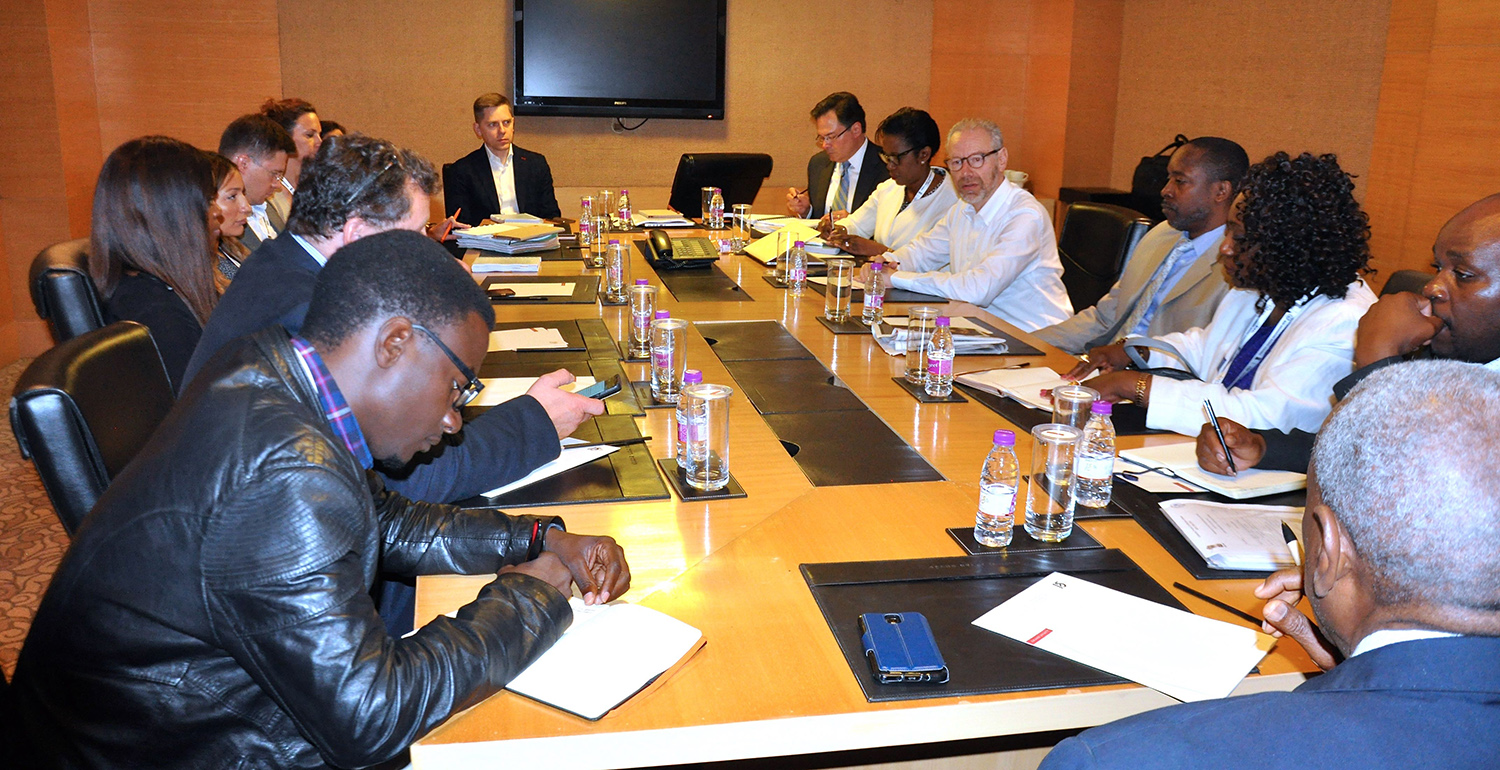